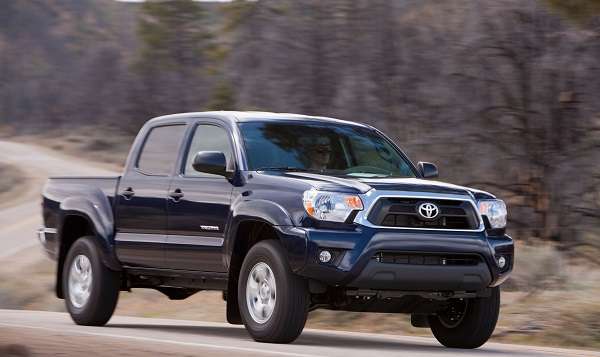 Those who read TN’s Tacoma reporting closely knew that Toyota made a small announcement last year that surprised some people. In October, we reported that Toyota was adding a shift at its Tacoma factory that could increase production by as much as 30% - if the customer demand was there to support that growth. The demand was indeed there. This is the first month that the Tacoma’s new capacity has shown up in its monthly sales, and the impact is huge.

Tacoma Sales History
The Tacoma has typically sold in the 9,000 to 11,000 unit per month range for the past few years. The full-size Tundra is produced in about the same numbers. The factory capacity for U.S. trucks is limited purposely by Toyota. For many reasons, Toyota opts not to try to compete aggressively with GM, Ram, and Ford on larger full-size tricks. Toyota’s Tundra and Tacoma share the plant and over the years Toyota would reduce one model slightly to give the other more capacity on a month-to-month basis.

Last year, the third shift was planned for a Q2 2015 expansion to add a production. That has now come to pass, and Toyota has significantly increased Tacoma production without having to steal capacity from the Tundra. The Tundra was also up this month. It should be noted that this month had one fewer sales day than May 2014, so the increases are all the more impressive.

Chevy announced today that it had captured “one-quarter of the mid-size pickup truck market” with its excellent Colorado. The truck is a hands-down success, and it is augmented by its twin, the GMC Canyon, also meeting expectations.

Tacoma, Colorado, Canyon, Frontier Sales Numbers
In May, Toyota sold 17,520 Tacomas. This is the older design, not the new 2016 about to come to the U.S. market in a few months. Chevy sold 8,881 Colorados, and GMC sold 2,901 Canyons. Nissan’s Frontier, the last mid-size model in the marketplace sold 5,439 units, down 18% for the month.

Conclusion – Mid-sized Truck Market Expanding
The upshot of this is not that one truck is “beating” the other. Rather, the mid-size truck market is going through a rapid expansion. Both GM and Toyota are reaping the benefits of their hard work. With Toyota’s all-new 2016 Tacoma about to launch, and with its new expanded capacity, Toyota seems well positioned to retain its segment leadership in the months and years ahead. Chevy too will expand its capacity. Both are likely to continue to be able to sell all the mid-sized pickups they can build, and at a healthy profit.

Ben wrote on June 2, 2015 - 8:58pm Permalink
To keep the facts strait you need to report that the sales of the GM twins are low because supply is still outstripping demand. The local GMC dealer has only gotten 1 Canyon in stock at a time and it sales right off the truck.
John Goreham wrote on June 3, 2015 - 9:05am Permalink
Good point Jim. Worth emphasizing. I think I cover that in the conclusion, but maybe not as strongly as I could have. Also, Toyota proved in May that its mid-size truck sales too are limited only by production capacity. To add to your point though, in this week's sales recap GM said in its press statement "Demand for the all-new Colorado midsize pickup is rising faster than GM’s ability to increase production, even with the addition of a third production shift in March."
Steve wrote on June 3, 2015 - 2:37am Permalink
I love my Tacoma, but I'd trade it in for a black 2016 Canyon with a Duramax in a heartbeat. Interested to see pricing.
dick786 wrote on June 3, 2015 - 9:15am Permalink
It's to show how we Americans don't do our homework before buying a new vehicle. The new Colorado is by far a better vehicle and yet Toyota sells twice as many. I traded my Tacoma for a new Colorado and I can tell you the Colorado is better in every way. Toyota is at a point like GM was 40 years ago. They can sell s&$t and people will buy it like hotcake.
erocksnow wrote on June 3, 2015 - 2:36pm Permalink
Shows that people care about QDR and like a proven quality product. Not to mention the resale value of Tacoma's being so high. You can purchase one and not worry about being upside down on your loan.
Tech1 wrote on October 17, 2015 - 2:52pm Permalink
The only resale you will get is at a Toyota dealer not any other MFG. They are all rust buckets.

Tesla Contemplates A New Strategy for China Retail even As Sales Boom
Jay Leno on Elon Musk & EVs: “I Think He Should Get ... Credit"
END_OF_DOCUMENT_TOKEN_TO_BE_REPLACED