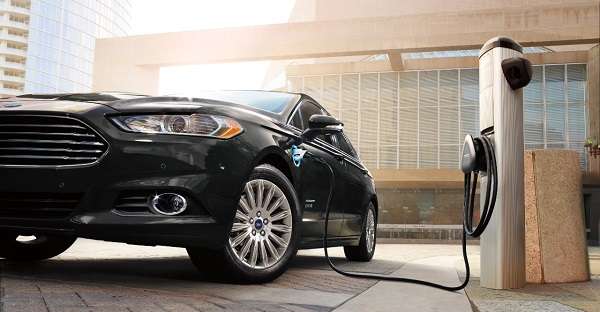 In a move that was hard to see developing the Ford Fusion Energi plug-in hybrid jumped up to the number two spot for electrified vehicle sales last month. Why aren't the full electrics doing better?
Advertisement

2015 Ford Fusion Energi Sales Trend Up
The 2015 Ford Fusion Energi did not come out of left field. Last month, the Toyota Prius had a tremendous month of sales or the Fusion might have gotten some attention with its May sales of 1,342 units. If Ford maintains these sales numbers the Tesla Model S may be relegated to fifth place in US monthly sales. Tesla’s US sales have dipped back down to roughly 1,100 per month.

Plug-In Hybrids Are Where The Market Is Accelerating
In order to catch the Prius Plug-In for 2014 total sales the Ford Fusion Energi has some catching up to do. It would need to beat the Prius by 3,000 units between now and year’s end. That could happen, but it seems unlikely. Looking at the sales numbers it seems more reasonable to predict that the Ford could possibly catch the Volt and Tesla, though sales of these green cars tend to swing on so many variables it is really like reading tea leaves. Many EV advocates predicted that the Prius Plug-In would suffer a sales reduction when the California HOV stickers ran out. Instead The Prius with a plug's sales leapt up to their highest back to back months sales since the car’s introduction in 2012.

Could Toyota Be Right About Fully Electric Cars Not Working?
One trend worthy of its own separate article is that full electric vehicles are not selling better than vehicles with some form of electric drive combined with some form of gasoline engine to propel the vehicle. The Volt was the first of these "sort-of-electrics" and there are many more now. This is the dirty little secret that many in the EV community are not talking about. Gasp! Could Toyota be right! Horrors.

Related Stories:
Nissan LEAF continues impressive monthly sales hot streak
Like the Mercedes B-Class, every electric vehicle should offer extra range as an option
As Tesla slips to fourth in sales many underestimate Toyota's impact on US electric car market

For a complete listing of US Electric Vehicle Sales please see this link.

Note: For this story we did not look at which model year made up the Ford's June sales, 2014 or 2105. Frankly, we don't think it matters. Ford is now advertising the 2015 Fusion Energi model.

Parks McCants wrote on July 8, 2014 - 3:24am Permalink
Interesting read. Tiny sales numbers.
John Goreham wrote on July 9, 2014 - 4:27pm Permalink
I agree completely. Overall with regard to EVs, never before has so much been said, so passionately, about so little. On the other hand, consider the amount of press for the Scion FR-S, Mazda Miata, and Subaru BRZ. This Ford beat all those models in June. The top handful of these green machines now sell in numbers higher than a lot of enthusiast cars. The rest of the EVs are ridiculously rare.
Steve Reed wrote on July 13, 2014 - 12:12am Permalink
Tesla sold 1800 cars in North America in June, not 1100.
John Goreham wrote on July 13, 2014 - 9:52am Permalink
Thanks Steve. Yes, estimates are the Tesla did 1800 in June. Also true is that for the year Tesla has done roughly 1100 per month. The estimates get revised after Teslas quarterly reports. Cheers
Steve Reed wrote on July 13, 2014 - 10:28am Permalink
I think the problem is you are comparing sales during June when sale they were clearing out last years model, so the prices were better to Tesla's average over the whole year. The Energi sales average over the last year is way under 1000. Don't get me wrong. I like the Energi. I would have one instead of our Volt if it were available when we needed a car, but I don't think you can make any yearly sales predictions based on the bump in May/June. we need to see how sales of the 2015 model hold up over a few months.
John Goreham wrote on July 14, 2014 - 12:41pm Permalink
You're right.