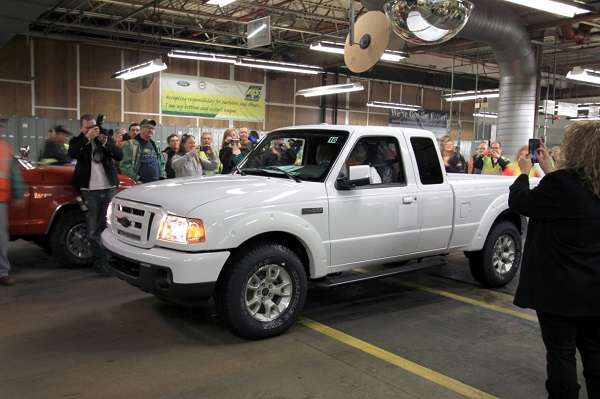 There are three main reasons why a new Ford Ranger will not be created any time soon by Ford.
Advertisement

The new 2015 Ford F-150 breaks new ground for the truck market in many ways besides the big news of its aluminum shiny parts. The truck will also have a lighter, stronger frame. It will have a new EcoBoost engine that is not meant to replace the larger V8s of competitors, but rather, to fill the gap just below that level of grunt. The truck also has cool new technology in the cargo bed, lighting, and many other areas. This is great news for full size truck lovers, and conversely, terrible news for Ford fans hoping for a new Ranger compact pickup truck.

Just as Chevy and GMC are launching 2015 Colorado and Canyon compact trucks to take back the market from Toyota’s Tacoma, the folks at Ford are now in a position of moving away from compact trucks for three main reasons.

Aluminum Would Not Work in a Ranger
The first theory I offer is critical to the rest of this argument. That is that a Ranger would not make economic sense right now for Ford. Later maybe, but for the coming five years or so the whole world is going to need to adjust to the fact that Ford is going to use a tremendous amount of aluminum for the 2015 F-150. This is not my idea. I heard the chief engineer for the F-150, Pete Reyes say those words. He specifically said that when Ford met with the worlds’ aluminum producers it was clear that there was not enough capacity– on Earth – to meet the demand. Trying to squeeze more blood from that stone to make a small truck is not in the cards right now.

The Fuel Economy of the 2015 F-150 Would Top Ranger’s
Given the reality that an aluminum Ranger will not work, a new steel Ranger could weigh close to the same as the 2015 F-150’s smaller versions. The main reason for a smaller truck is affordability. Although some do like smaller trucks, there is no business case for them if they are not more fuel efficient by a substantial margin when compared to their siblings on the showroom floor. Sure Ford could make a hybrid or some other un-sellable version to post good fuel economy, but Ford has not done anything that dumb in a long time. Fuel economy is the main reason a new Ranger makes little sense.

CAFE Advantages Lost on Ranger
Tied to the aluminum and fuel economy issue is the reality that a Ranger built mainly for a size would not help the Ford Corporate Average Fuel Economy (CAFE) and might actually hurt Ford’s overall rating. Scores are like reading tea leaves, but we do know they are tied to size and wheelbase. A Ranger that does not add to Ford’s CAFE score is never going to happen.

Conclusion – No New Ranger
This case against the Ranger is not made in malice. We have said nothing but good things about the new Chevy Colorado. We think that new compact truck is going to ruin Toyota’s day once sales are established. It is also a shame that a Ranger can’t make sense for now since if it were made of aluminum, and had a decent engine, like the new 2.7 liter EcoBoost it would be a rocket and a fuel sipper.

One last issue could be Ford’s capacity to do too many big things at once. The F-150 is a make or break bet by Ford, and they will succeed. Diluting that effort by looking at a small truck, to sell in much smaller numbers, for no fuel economy gain, was not the kind of questionable move Ford’s outgoing manager was known for making.

Related Stories:
Aluminum 2015 Ford F-150 not at risk from hail damage according to top engineer
Future Ford F150 Could Be Made from Ketchup Byproducts
Top 2015 Ford F-150 Features Every Truck Needs

Our thanks to truck expert Tim Esterdahl for his contribution to this story.

Parks McCants wrote on June 28, 2014 - 6:14pm Permalink
MORE THAN FUEL ECONOMY: 'Real World' applications demand a smaller truck of great utility. Now, I like a full-size pickup as much as the other guy. As the(retired) owner of a midsize commercial construction company, I ran Chevrolet, Dodge and Ford in the company fleet, with a Nissan and Toyota thrown in for good measure. Here's what I learned over a 30 year period with well over a million driven miles or so. You don't need a full-size pickup to perform a medium or small task; it's that simple. For years I rotated two personal drivers. A 2500 Dodge Cummins T.D. 4x4 regular cab and a V6 Club Cab Ford Ranger 4x4. Both were reliable and relitively economical to drive. While I loved the presence( Big Dog) and the work(load and tow) capability of the 3/4 ton, I would find myself more often than not grabbing the keys for the Ford Ranger. It wasn't the fuel economy(didn't matter at the time,) it was the ( size to the task) utility of the smaller Ranger, the ride of road and the parkability of the smaller truck in town. I find it to be bordering on absurd every time I view a good looking blond in high heels(nothing wrong with that) exiting a massive extended cab F150 while performing daily tasks. In the Midwest,( Ford's Best U.S. truck market) the F150 is a CAR-TRUCK, the family hauler, and I can appreciate that. However, the rest of the Nation could use a smaller (perhaps hybrid) Ranger for light construction, daily commuting, etc. As to the composite that the truck is manufactured from? I don't care if it's made out of Soy Beans.. Bring it on Ford.
John Goreham wrote on July 4, 2014 - 3:56pm Permalink
We have some things in common. For 4 years I also worked in light construction creating walls and other things on new homes as part of a couple landscape crews. As the older guy and more responsible (and a US citizen with a license) I got to do most of the materials runs. Both companies used base model trucks. The first mostly GMC and Fords with 6-cylinder engines and RWD. They were bullet proof. The second company used little Isuzu pickups RWD, 4-cylinders. The owner never did any maintenance. None. No oil changes, nothing. He would keep them about 3 years, or about 60K miles and then dump them. They never broke. When I graduated college I bought a Mitsubishi Mighty Max 4-cylinder, RWD. It never broke. Now my contractors come in these huge, ginormous limo trucks and they tow their stuff on fancy trailers. Things have changed, but the small, and basic trucks not being able to handle the job had nothing to do with it.
Parks McCants wrote on July 4, 2014 - 8:27pm Permalink
Thanks John. Good read.
Dean wrote on July 9, 2014 - 5:03pm Permalink
I'd like a manual transmission like I have in my Ranger, but the F150 only has automatics. I'd also like 4WD with that manual transmission, which I think will rule out the new Colorado. So it looks like Tacoma is my only choice.
davey wrote on July 14, 2014 - 5:56am Permalink
Ford says aluminum will save 300-700 lbs the f150 will still be to heavy to sell as a midsize Ford desperately needs a diesel but not a navistar please
Justin wrote on July 19, 2014 - 5:17pm Permalink
One wrong fact the Ranger is still produced just not in the states. It still lives strong in Europe.
SayWhat wrote on July 27, 2014 - 8:19pm Permalink
Lots of other sites reporting a new ranger FOR NORTH AMERICA will arrive in 2015/2016. Ford has to do a ranger. It can't give that to GM and the new F150 will cost more. Period. So if someone wants to enter the ford truck family that leaves??? Exactly. They need a new ranger. Fuel savings with the F150 is exactly what will allow them to do a new ranger. CAFE doesn't get real serious for 5 years minimum and using aluminum in their cars will offset any ranger problems. A small diesel however would eliminate any worries as would an ecoboost gas. So this article is basically 100% BS.
Coach Hunter wrote on September 20, 2014 - 11:40pm Permalink
As a 2010 Ranger owner I would love to be able to buy a new quad cab Ranger. Don't want a big truck love the size of my truck now. Come on Ford be reasonable and market the truck we want. I don't want to be forced into buying a Chevy.
Dennis McFarland wrote on November 2, 2014 - 7:04pm Permalink
I'm currently on my 4th Ranger (2005), and I will buy a USED Ranger before I will EVER buy a NEW F-150 or Escape. Come on on Ford, are you going to force Ford owners to buy a Chevrolet to get what they want? You want sales, BRING BACK THE RANGER!!!!
RangerFan wrote on December 20, 2014 - 9:43pm Permalink
Have noticed in researching on other sites about a new Ford Ranger, they're already in production and being sold in other countries, but none being made or will be sold in the US. I believe the Fiesta was once made in the US a long time ago, then stopped and made overseas, but was brought back to the US a few years ago with a new design. I agree with the others, PLEASE MAKE A NEW RANGER!!
Aaron Fodor wrote on January 25, 2015 - 11:45am Permalink
I hope Ford makes a ranger replacement. I like the new Colorado, and Toyota just announced a new Tacoma with a new 3.5v6 for 2016. Nissan plans to re-do the Frontier and maybe make a 2.8 cummins turbodiesel for it(which I would love). If Ford used the 2.3 ecoboost 4cyl from the Explorer I would get one.