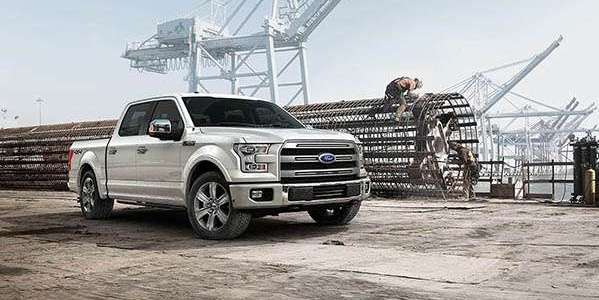 The all-new 2015 Ford F-150 has been a hot topic lately with its extensive use of aluminum. However, that's not the only thing on this new truck that people should be talking about. Ford's new F-150 has five smart features that should become standard on all trucks.
Advertisement

More than 72 percent of the vehicles on the road have a keyless ignition system. What makes up the other roughly 30 percent? Trucks mostly.

Of course, many truck fleet buyers will continue to prefer cut metal keys for the foreseeable future (fleets like these better because of their lower cost and easier key management), but keyless ignition should at least be available on every pickup.

Bring Back The Driver's Grab Handle

A staple of trucks for decades, the driver’s side grab handle has been slowly dropped by several truck makers. This trend needs to stop.

Ford was one of the first to drop the handle, and critics/journalists/consumers have been harping on them ever since. Following Ford's lead, it wasn’t long until others dropped the handle as well. The reason? Engineers say the handle isn’t needed, as drivers usually grab the steering wheel to help hoist themselves into the truck. Even though the engineers may be right, consumers have just become “trained” to NOT grab the steering wheel. Many truck fans had just gotten used to the new handle, and smartly Ford decided to bring the handle back. The other makers would be smart to follow the leader here.

A top after-market modification item for years has been adding lighting to the bed. The fact is, trucks are used day and night for all sorts of purposes. Adding bed lighting makes a truck bed a little more useful.

Truck makers have tried to fulfill this need by adding a light on the cab which shines into the cab. This is OK, yet it can shine on top of your load leaving dark corners, not to mention that light is staring you in the face, which can be a negative if the rest of your surroundings are dark.

Following GM's lead, Ford has added LED lighting under the bed rail. This means, no more dark corners and no more fishing for items hidden even after the cab light is illuminated. This is really just the next evolution of the cab light and, once again, it should be a standard feature among all trucks.

Trucks are made for towing with large payloads and capacities. However, one problem that has long nagged truck owners is lining up the ball with the hitch. Ford gets that trucks are made for work and towing. It shouldn't be a surprise then when Ford announced a new trailer hitch assist feature that takes the guess work out of lining up the trailer.

Dynamic trailer hitch assist works by superimposing an imaginary line on the backup camera's LCD screen. This line helps the driver lineup the trailer without having to rely on trial and error or another person's help. Anyone who has ever tried to line up a hitch all by themselves will immediately get the benefits of this system.

Another luxury car item making its way into mainstream vehicles is the next evolution of camera technology. The 360-degree camera system provides drivers a complete view around their vehicle. This is really useful for truck owners who can utilize it when:

The system uses four cameras on each of the corners of the pickup to create the 360 view. A computer takes the 4 different images and patches them into one. Then, the driver can see all around them.

This handy feature is great for large full-size trucks which suffer from visibility and size issues. Having a 360 camera system allows you to more easily see obstacles before you run over or into them.

While the attention on the new F-150 is focused on the use of aluminum, these other features are incredibly handy and useful. It’s time for everyone to follow the leader and make these options standard across all truck lineups. What featured do you think every truck should have?