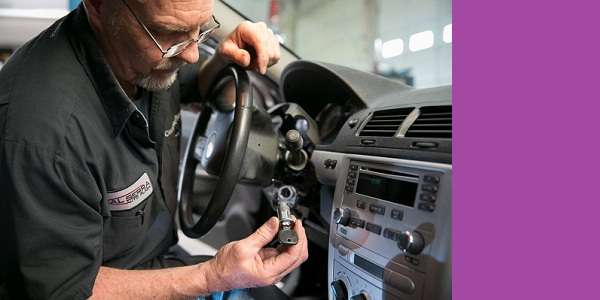 The GM ignition switch debacle has raised an interesting question: Do we really need car keys? After all, if GM cars had used keyless, push-button ignition systems rather than physical keys, GM wouldn’t be in this mess.
Advertisement

Several auto manufactures currently use keyless fobs that can automatically lock and unlock cars, enable starters, etc. These are a valid alternative to the simple car key, and offer many benefits over cut metal keys. Will GM's recall fiasco officially put an end to the traditional car key?

Way back in 1949, Chrysler first standardized keyed ignition switches across their lineup. At the time, it made a lot of sense. Those cars were pretty simple to break into back then. Just take a screwdriver and show it through the door lock. Having a keyed ignition simply made it more difficult to steal … unless you watch a lot of Hollywood movies and know how to hot wire a car.
Over time, keys evolved into the door key, valet key and then ignition key. GM, among others, made the keys in different shapes to help identify which key was which.

The ignition switch has also evolved. Nowadays, the switch is tied to a complex safety system that ties in the engine, airbags and security systems. If something goes wrong with the switch – like a heavy set of keys wearing down the mechanism – it could shut off those systems inadvertently. This is precisely how GM ended up in hot water.

Modern keyless ignition systems with push button starters began showing up in luxury cars in the late 1990's, and currently 72% of all vehicles have a keyless ignition option. All you need to use one of these systems is a keyless remote fob on your person – in your pocket or purse - and the car takes care of the rest. The vehicle detects the fob, unlocks car doors, and then enables the start button.

The benefits of these systems are numerous:

• Consumers don’t need to carry around keys...no more fumbling for keys with bags of groceries, etc
• Automakers don’t have to worry about ignition switches becoming faulty (a larger issue than you would think)
• Vehicles ignitions can't accidentally switch off when jolted
• Vehicles become a little harder to steal, at least assuming a thief doesn't have the vehicle owner's fob

The first benefit is really the most important, as consumer preference largely drives the market. According to an AutoPacific survey, consumers ranked keyless ignition technology the fifth most coveted upgrade for $100 or less.

Of course, like all things electronic, there are some disadvantages too. In an emergency situation, drivers don't always know how to deactivate a vehicle with a push-button starter. A very famous incident in 2009 - where a police officer driving a Lexus with an obstructed accelerator pedal crashed and died (along with his passengers) - serves as a tragic reminder of the problems associated with changing what is a commonly understood technology.

What's more, while keys aren't as convenient as keyless systems, they don't require batteries or sophisticated electronics. They're also less costly than simple keys and ignition cylinders. Still, if history has proven anything, it's that consumers and regulators are eager to pay for safety. From ABS to airbags to back-up cameras, NHTSA has never been shy about mandating safety equipment that costs money.

When you add it all up, it seems like a near certainty that keyless ignition systems will replace the old-fashioned cut metal key.

Bob wrote on May 19, 2014 - 3:28pm Permalink
It's a long time coming for all auto makers. I would like to be keyless entry in my house as well.
Michael Carr wrote on May 20, 2014 - 10:49am Permalink
GM is quite capable of messing up keyless and killing people with that as well.
Paulo wrote on May 20, 2014 - 11:07am Permalink
I believe, the system "push botton" will be available soon for all cars, the electronic ignition will be safe and cheaper when produced on large-scale to basic and luxury cars. I have a doubt! Is it compliant with Thatcham security?
EDDIE LEIDENHEIMER wrote on October 16, 2016 - 12:47pm Permalink
have keyless on my 2012 buick ,accidently left car with running and doors unlocked , was gone for 2 hrs . what can I do to prevent this from happing again ??????????
Martin Barcellos wrote on September 26, 2017 - 12:17pm Permalink
Can I order push button start on 2018 GMC Denali? My wife's 2015 Yukon has it .