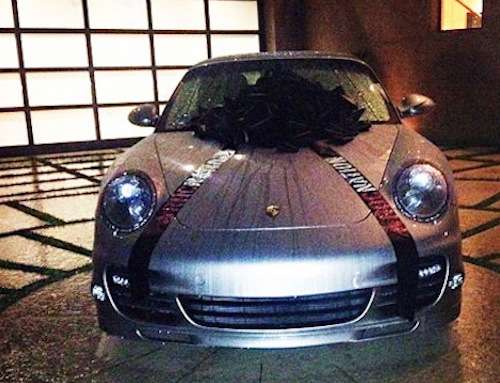 Pop star Rihanna has just received the Christmas bonus of a lifetime from her boss. Not that she can’t already afford it, but the singer’s record label, Roc Nation, has just given her a $160,000 Porsche 911 Turbo S as an early Christmas present. Rihanna, 24, boasted about her new ride earlier this week tweeting: “Turbo on dat a$$. All I see is signs, all I see is dolla $ign$.”

The “Diamonds” singer later posted three photos of her new Porsche 911 on Twitter and Instagram. Rihanna thanked her friends at Roc tweeting: “Ain’t nobody f--kin wit my clique! Thank you to me Roc brothers! I love you guys, y’all are crazy for getting me this bad ass ho.”

Rihanna’s new gift marks the second time the singer has owned a Porsche. The Grammy winner previously purchased a Porsche 997 Turbo several years ago, the same vehicle featured in her 2008 music video for “Take a Bow.”

Rihanna's new Porsche 911 Turbo S should look nice in front of her new Pacific Palisades home, which she recently purchased for $12 million. The singer’s new 11,000-square-foot mansion features seven bedrooms, nine bathrooms, media and game rooms, lounging deck with a barbecue and bar, and a fountained swimming pool. Not to mention, the massive home comes with 20 parking spaces.

Aside from the Porsche 911, Rihanna’s new 20-car lot will likely contain her previous gift from the Roc Nation. In January 2012, Rihanna’s management gave her a black Jeep Wrangler after the artist was named best-selling digital artist of all time. In fact, Rihanna has garnered an incredible 60 million digital downloads as of December 2012.

The “We Found Love” singer’s car collection may also include her previously purchased Chevrolet Suburban LTZ, which touts a 6.0-liter V8 engine. Rihanna originally bought her Suburban in 2010 so it’s unclear whether it’s still part of her collection.

Born Robyn Rihanna Fenty, Rihanna is a Barbadian recording artists and actress. She has released seven albums, beginning with her 2005 debut Music of the Sun. Rihanna most recently release is Unapologetic, which came out in November. In addition to her 60 million digital downloads, Rihanna has sold over 25 million albums worldwide.