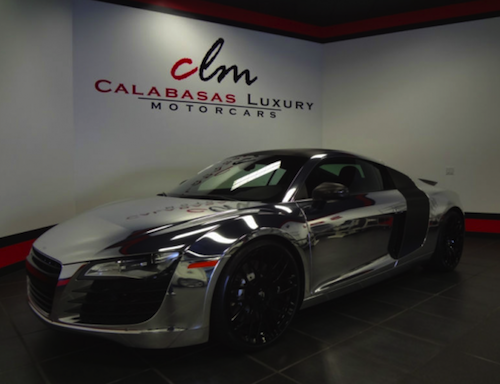 Disick's custom vehicle will set you back a cool $135,000.
Advertisement

So what will this Audi supercar set you back? The car features a Buy It Now price of $134,995.00. There are currently 16 hours remaining to purchase it. As might be expected, only serious buyers will be considered. In fact, prospective buyers will have to undergo an extensive verification process to ensure they can complete the purchase. Full payment is required within 7 days of auction close. Vehicle pick-up and shipping is the responsibility of the buyer. It is eligible for up to $50,000 in Vehicle Purchase Protection through eBay. The vehicle does not come with any existing warranty.

While many people might not consider Disick a celebrity per say, he is a notable face on reality television. Best known for his role on Keeping Up with the Kardashians, Disick is the boyfriend of Kourtney Kardashian and father to Kourtney’s 2-year-old son Mason Dash Disick. In addition to Keeping Up with the Kardashians, Disick has appeared in the show’s numerous spinoff series including Kourtney and Khloe Take Miami and Kourtney and Kim Take New York. Apart from “acting” Disick is also a model. Disick and Kardashian are currently expecting their second child.

The Audi R8 is a favorite of many celebrities including Taylor Swift, Hugh Grant, Hayden Christiansen, Jay Leno, Simon Cowell and Lady Gaga. In addition to the aforementioned celebs, the R8 was recently featured in the summer blockbuster The Avengers. The ultra-cool supercar was actually the personal ride of Tony Stark aka Iron Man.

The current Audi R8 GT, which was recently purchased by Lady Gaga, is capable of going 200-mph and costs approximately $200,000. Not to mention, the car was limited to a production of 333 vehicles.