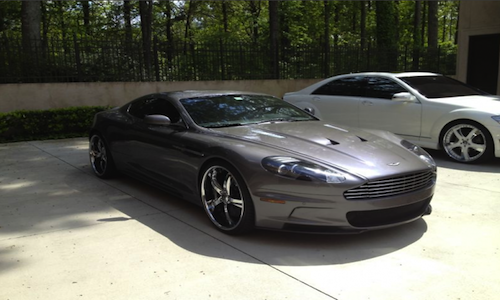 Want to own the former ride of a Super Bowl MVP? Well, here's your chance. Ex-Pittsburgh Steelers’ wide receiver Hines Ward is selling a pair of ultra-luxurious cars on Ebay. The 14-year NFL veteran is currently trying to move his 2009 Aston Martin DBS and 2010 Mercedes-Benz S-Class S550. There is currently 1 day left to bid on the 2010 Mercedes-Benz, which is up to $72,875 and 4 days left on the 2009 Aston Martin, currently sitting at $152,500.00.

The 2009 Aston Martin DBS comes with a 5.9-liter 12-cylinder engine and a manual transmission. Ward’s former car has not been tinkered with and comes with factory wheels and tires. That said, it does feature a number of impressive interior features like Bang & Olufsen premium brand speakers (13 in total), 1000 watts stereo output, in-dash 6 CD player, iPod integration, USB connection and 1 subwoofer. Ward’s Aston Martin also includes a hard drive based display with voice directions navigation system and Bluetooth wireless data link for hands-free phone. The Ebay listing states that the car was “meticulously taken care of” and has just 10,470 miles.

Unlike the Aston Martin, Ward has made modifications to the 2010 Mercedes-Benz S-Class, including a $25,000 investment in a customer body kit and wheels. The vehicle’s body kit comes from WALD and wheels are by Vellano. The car also comes with a P02 premium package that includes keyless go, comfort headrests, drive dynamic multicontour front seats, parking guidance, rear view camera and parktronic. Performance wise, this S-Class comes with a 5.5-liter 8-cylinder engine. It currently has 12,728 miles. Like the Aston Martin, the Mercedes-Benz also comes with a Carfax and Autocheck.

Aside from selling his rides, Ward has also put his 12,000 square foot Atlanta mansion on the market recently for $7.5 million. Although many former athletes continue their extravagant lifestyles after their playing days are over, Ward seems to be establishing a nice retirement fund. Despite his successful career, Ward was cut from the Steelers in March; a victim of the salary cap. The 36-year-old was slated to earn $4 million in 2012, which was hard to justify based on his diminished role last season. Rather than testing the waters, Ward opted to retire as a Steeler. Ward holds nearly every franchise receiving record including receptions, receiving yards and touchdowns. He is only one of two players to have at least 1,000 receptions and two Super Bowl rings.

Want to bid on Ward’s cars or just check out a pair of super-expensive cars you can’t afford? Click HERE to view the 2009 Aston Martin DBS and HERE to see the 2010 Mercedes-Benz S-Class.