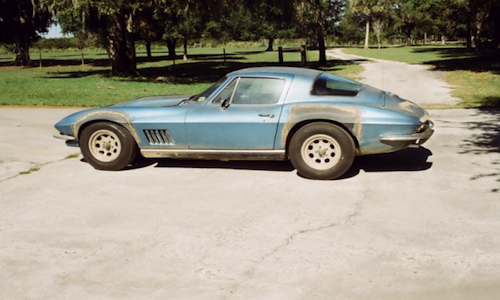 A 1967 Chevrolet Corvette once owned by Neil Armstrong is currently available on Ebay with a reserve price of $250,090.
Advertisement

Would you like to own a piece of history? Well, you’re in luck, because a 1967 Chevrolet Corvette 427 once owned by astronaut Neil Armstrong is up for grabs on Ebay. Armstrong’s former vehicle is currently up to $249,990 with one day left to bid. There have been 72 bids for the Corvette thus far, but the vehicle’s $250,090 reserve price has not been reached. Whoever win’s Armstrong’s car must deposit $2,000.00 within 24 hours of auction close and pay the entire amount in 7 days. The buyer is responsible for vehicle pick-up or shipping. Additionally, the vehicle is eligible for up to $50,000 in Vehicle Purchase Protection.

So how did the first man on the moon’s 1967 Corvette make its way to the auction block? Jim Rathmann of a Chevrolet-Cadillac dealership in Melbourne, Florida originally gave Armstrong the car as part of a promotion. Rathmann, a former Indy 500 winner, created a program in the 1960s that provided astronauts with a pair of new cars each year. Most astronauts chose a family car for their wives and a Corvette for themselves. Astronauts such as Alan Shepard and Gus Grissom famously raced their Corvettes in a series of friendly contests.

As for Armstrong’s car, the vehicle was first delivered to him on December 15, 1966. After one year a NASA employee purchased the car, which stopped driving it in 1981. The Corvette was then kept in storage until its current owner purchased the vehicle several months ago. Unfortunately, years of storage have left the vehicle covered in rust and dust.

Despite its appearance, it is all-original except for the wheels, water pump, carburetor and mufflers. The owner indicates that he has purchased a N.O.S. correct date water pump and has located an original carburetor. The seller’s original intention was to restore the car, but has now decided to sell it. This 1967 Corvette contains a four-speed manual transmission, AC, 390-horsepower, tinted glass, power windows, radio, factory transistor ignition and the original spare tire. It contains 38,000 miles, although this cannot be verified due to a broken speedometer. The car’s history is documented via an original G.M. Protect-O-Plate with Armstrong’s information.

Prior to becoming an astronaut, Armstrong was in the US Navy and served in the Korean War. Armstrong’s impressive resume also includes being a test pilot, aerospace engineer and professor at the Department of Aerospace Engineering at the University of Cincinnati.