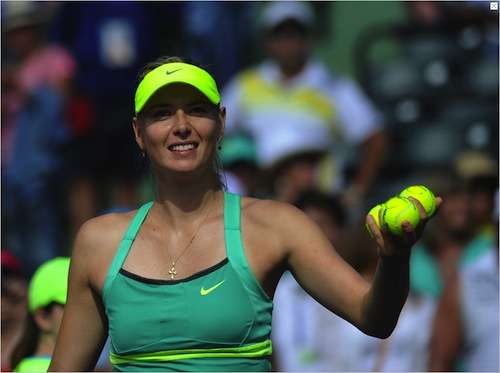 Maria Sharapova can now add Porsche to her list of endorsement deals; a list that already includes Nike, Gatorade, Canon and Tropicana among others.
Advertisement

Tennis megastar Maria Sharapova has added yet another company to her long list of high profile endorsements: Porsche. The sports car company announced today that the 26-year-old Sharapova will represent Porsche as its brand ambassador. The luxury automaker has signed Sharapova to a three year contract in which the tennis star will play an integral role in Porsche’s global communications campaign.

“Maria Sharapova is an exceptional athlete," said Matthias Mueller, CEO of Porsche AG. “Maria Sharapova is the perfect choice. "She combines top performance in her sports with elegance and power. These are precisely the qualities that are embroiled in our sports cars. Her profile and charisma are an ideal fit for Porsche. She is also highly respected around the world and enjoys an outstanding reputation.”

“This is a really special day for me. I have had the privilege to be associated with some of the best brands in the world, but now to be partners with Porsche, is such an amazing honor,” said Sharapova.

Born in Russia, Sharapova moved to the United States at the age of seven. Two years later, Sharapova was accepted to the world-renowned Tennis Academy of coach Nick Bollettieri. At age 17, Sharapova won her first Grand Slam title at Wimbledon, making her the third-youngest player ever to do so. Sharapova followed up her Wimbledon victory with three other Grand Slam titles: U.S. Open 2006, Australian Open 2008 and French Open 2012. In total, Sharapova has won 28 singles titles, and a silver medal at the 2012 Olympic Games in London. She is currently ranked second in the world by the Women’s Tennis Association (WTA).

Aside from being a recognizable face on the tennis court, Sharapova is a well known celebrity endorser. Following her Wimbledon win in 2004, Motorola signed Sharapova to endorse their line of mobile phones, making it her first major endorsement. Sharapova would go on to appear in commercials for Land Rover, Canon, Gatorage, Tropicana, Tag Heuer and Tiffany. In 2010, Sharapova signed an 8-year deal with Nike for $70 million, which remains the most lucrative deal ever for a female athlete.

In addition to appearing in countless commercials, Sharapova has graced the covers of many magazines. Maxim magazine ranked Sharapova the hottest athlete in the world for four consecutive years beginning in 2003. In 2006, Sharapova did a six-page spread in the Valentine’s Day issue of the Sports Illustrated Swimsuit Issue. FHM magazine ranked Sharapova seventh on its most eligible bachelorette list, which is based on both “wealth and looks.”

Stay tuned to see how Porsche utilizes Sharapova in its upcoming print, online and television ads.