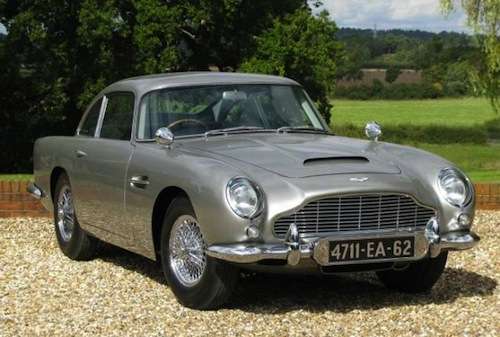 A rare Aston Martin DB5 used in the James Bond series is currently up for sale thanks to Aston Martin Specialist Dealer RS Williams with an hefty asking price of $4.7 million.
Advertisement

Movie fans rejoice, because one of the four original Aston Martins used in the James Bond series is up for sale. Although the vehicle never appeared on screen with Sean Connery, this 1965 Aston Martin DB5 was the franchise’s official promotional vehicle and the only remaining DB5 to contain all of the official Bond gadgets featured in the movies. The vehicle’s asking price has been set at 3 million pounds ($4.7 million), according to the Declan Herald.

Being sold by UK Aston Martin expert RS Williams, the 1965 Aston Martin DB5 includes a 21-page brochure outlining the car’s laundry list of gadgets and how each is activated. While it may not contain the conveyances of a modern supercar or even cruise control, this classic DB5 does possess revolving number plates, oil slicks, a bullet-proof rear screen, front-mounted machine guns, hidden telephone receiver and a secret radar located in the wing mirror.

Overall, there were four Aston Martin DB5s manufactured for filming and promotion of the Bond series. Two DB5s were built for use in Goldfinger, but one the cars was stolen from its owner in 1997. The remaining vehicle sold at an RM Auction in 2010 for a remarkable $4.1 million. Adding to the Aston Martin’s value is the fact that it was driven by Connery in both Goldfinger and Thunderball.

The other two DB5s were used to promote the Bond series, but never made their way on to the big screen. Aside from the model currently up for grabs from RS Williams, the other vehicle presently resides at the Louwman Museum in The Hague, Netherlands.

In addition to Goldfinger and Thunderball, the Aston Martin DB5 has been featured in four other Bond films. The car made a small appearance in 1995’s GoldenEye, driven by Pierce Brosnan in the film’s opening scene. Brosnan also briefly drove a DB5 in Tomorrow Never Dies during a transitional scene of Bond arriving at the Ministry of Defence.

Most recently, the DB5 appeared in Casino Royale and Skyfall. Although not original owned by Bond, the iconic spy acquires a DB5 during a poker game in Casino Royale. The franchise’s latest entry Skyfall, also showcases the DB5. Interestingly, Skyfall’s DB5 touts two gadgets: an ejector seat and two front firing machine guns. The use of the ejector seat and machine guns marked the first time the gadgets have been used in action since Goldfinger.

In September, the 2008 Aston Martin DBS featured in Quantum of Solace sold for $386,000 at Christie’s Auction in London. The supercar was driven by Daniel Craig in the movie’s opening car chase in Siena, Italy.