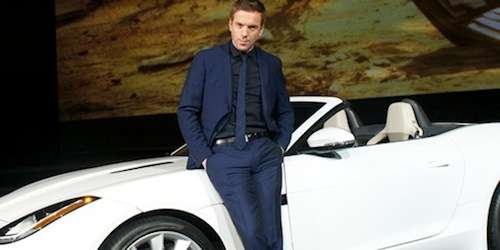 The upcoming short film about Jaguar F-Type titled 'Desire' will be directed by Adam Smith (Doctor Who) and co-star Shannyn Sossamon (A Knight’s Tale).
Advertisement

Jaguar is certainly pulling out all the stops to promote the F-Type two-seat sports car. Back in August Jaguar announced that it was joining forces with pop singer Lana Del Rey, and now the luxury automaker has released a teaser trailer for its upcoming short film Desire, which stars Damian Lewis of the Emmy Award winning show Homeland. Aside from Lewis, the forthcoming film also touts Shannyn Sossamon (A Knight’s Tale) and Jordi Molla (Bad Boys II). Not to mention, the movie will also feature an exclusive track by Del Rey titled “Burning Desire,” a song which the singer performed at the F-Type launch party in Paris.

The film, which was created in partnership with Ridley Scott Associates, centers on Clark (Lewis), a professional car deliverer, who runs into trouble after meeting a mysterious young lady (Sossamon). Helming the movie is Doctor Who director Adam Smith.

“When Jaguar approached me about the F-TYPE Desire film I was really intrigued. I then got to read the script and decided it was definitely a project I wanted to be a part of. Working with the director Adam Smith from Ridley Scott Associates, it promises to be an adventure. Jaguar cars have played some iconic roles in film for many years and I'm looking forward to being the first to drive the F-TYPE in film,” said Lewis.

Jaguar revealed the film’s centerpiece – the Jaguar F-Type – for US audiences just last week at the LA Auto Show. Cast members Lewis and Sossamon were present at the unveiling. Guests of the event were lucky enough to catch a glimpse of the film’s trailer, which can be viewed below.

As for filming, it is set to take place next week in Chile. Jaguar fans are encouraged to take place in the entire filmmaking process. The automaker will not only provide fans updates during filming, but it will also offer content updates during all phases of production leading up the movie’s release.

The Jaguar F-Type was previously featured in a commercial spot called “The all-new F-Type has arrived.” The advertisement begins with the warning: “always obey your local speed limits.” The alert is then followed by two professional drivers drag racing F-Type sport coupes along a mountainous roadside. The commercial also features an instrumental version of Del Rey’s “Burning Desire.”

Jaguar vehicles have appeared in countless film throughout the years including The Italian Job, Vertigo, A Fish Called Wanda, 48 Hours, Silver Streak and Terms of Endearment. The historic luxury brand was also featured on the hit series Mad Men earlier this year.