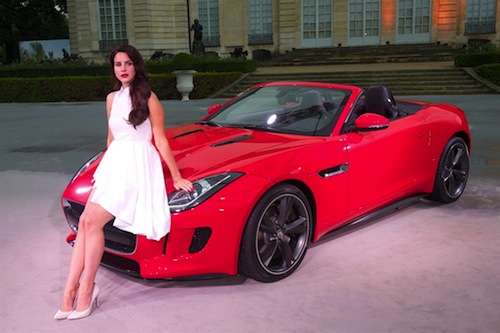 The singer even created an exclusive track titled "Burning Desire" for the ad.
Advertisement

Jaguar certainly cemented its relationship with new spokeswoman Lana Del Rey this week. Not only did the “Born to Die” singer help the automaker launch its new F-Type coupe in Paris, she is also featured in the Jaguar’s newly released commercial introducing the all-new sports car. Jaguar announced Del Rey as its spokeswoman in late August, but the partnership had not come to fruition until now.

Jaguar’s new commercial is actually derived from a new short film titled “Burning Desire,” which is also the title of a new song by Del Rey. The commercial (available below) features Del Rey, an instrumental version of the song, and the stylish new F-Type. The commercial opens with the warning, “always obey your local speed limits,” which is followed by two professional drivers drag racing F-Type coupes on a mountainous roadside.

As is true with the 2-minute plus commercial, the extended version will also showcase the F-Type in a uniquely cinematic fashion. “Film is an innovative platform for Jaguar to launch this car and we’re hugely excited to be working on this project. This will be genuinely surprising story for a brand to tell and we can’t wait to share it with film lovers and car fans across the globe,” said Kai-Lu Hsiung, Managing Director of Ridley Scott Associates, who helped create the project.

The Jaguar F-Type was unveiled earlier this week to a VIP audience at Musée Rodin, Paris. Del Rey performed her new track “Burning Desire” at the launch party.

A successor to Jaguar’s famous E-Type two-seater, the F-Type is a sports coupe intent on delivering performance, agility and the greatest drive reward. The vehicle is available in both a 3.0-liter supercharged V6 and a 5.0-liter supercharged V8. The F-Type has “1+1” style interior setup with a touchscreen display. The sporty luxury ride even has an inventive retractable rear wing spoiler and door handles that are hidden within the bodywork until needed.

The F-Type is designed to compete with fellow roadsters like the Porsche Boxster, Mercedes-Benz SLK-Class and BMW Z4. Jaguar has hinted at possible Plug-In Hybrid, All Wheel Drive and Diesel version in the future.