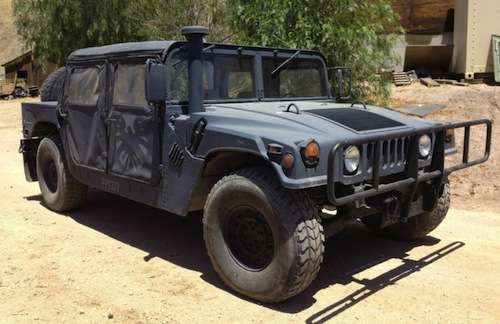 Humvee from 'The Avengers' for sale on Ebay

Though it may not be as nice as Tony Stark's Acura NSX, a military Humvee used in 'The Avengers' is currently up for grabs on Ebay.
Advertisement

Would you like to own a piece of movie memorabilia from one of the highest grossing films ever made? Well, here’s your chance. A M998 HMMWV, more commonly known as a Humvee, which was featured in The Avengers, is currently up for grabs on Ebay. Bidding for the military vehicle started at just $2,500, but has shot up to $10,100 in just one day. There are currently 6 bids on the vehicle. Whoever wins the bid will be responsible for paying a $500 deposit within 48 hours of auction close. Full payment is required within 7 days of auction close.

So what exactly would you be bidding on? This military issue vehicle is a 1986 AMG General Humvee. Most notably, this Humvee was one of four featured in The Avengers, which opened earlier this month with a record breaking $207 million debut weekend.

Aside from being in The Avengers, this Humvee was actually used by the military until 1999. It features a 6.2-liter diesel engine and two heavy-duty batteries. The vehicle contains 3,600 original miles. The Ebay listing states that this all-original vehicle “runs great” and “starts right up.” The Humvee was completely serviced prior to being listed on Ebay. Additionally, all systems were checked after filming on The Avengers wrapped last year.

The current owner purchased the vehicle at an auction in Riverside, California. The Humvee comes with a clean Arizona title, which is in the present owner’s name. All export shipments for the vehicle will require a state department permit. The buyer is responsible for vehicle pick-up or shipping. This Humvee is the last one available from The Avengers.

Those who have seen The Avengers (which is mostly everyone) may also remember the film’s other automotive stars: the Acura NSX and Acura MDX. Iron Man himself, Tony Stark, drove an all-new NSX Roadster in the film’s final scene. Interestingly, Stark’s character previously opted for the Audi R8 supercar in the Iron Man films. In addition to the NSX, The Avengers also starred another Acura vehicle, the MDX SUV. The custom Acura MDX touted a number of fictional features like an unmanned aerial drone, stealth invisibility generators and contained the famous S.H.I.E.L.D. logo.

Click HERE to check out the Ebay listing for the M998 HMMWV. There are 6 days left to bid on the vehicle. Deposits can be made via PayPal or credit card, but the remainder of the vehicle must be paid in a cashier’s check, money order or cash in person.