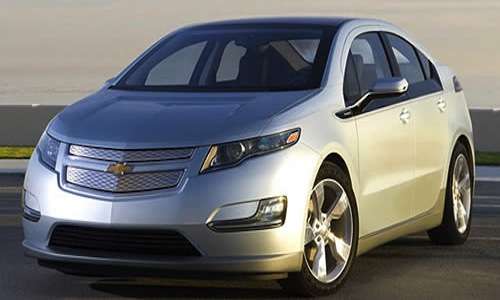 The former President broke party lines, becoming one of the first prominent Republican to endorse the Volt.
Advertisement

Who said the Chevy Volt was a liberal car? Former President George H.W. Bush just bought his son Neil a brand new Chevy Volt for his birthday. Bush Senior's purchase marks the first major Republican endorsement of the Volt, which has been a political football since it was first introduced. In addition to Bush’s support, high gas prices and recent word of a sales surge could mean that the Volt will finally reach the level of popularity that Chevy has hoped for. Chris Perry, Chevrolet marketing chief, told Ward Automotive that Chevy Volt sales had picked up during the month of March. Coincidentally, March marked the first month that Chevy has offered a zero-percent loan incentive on the Volt.

The news of Bush’s Volt acquisition comes in the same week as a Fox News anchor praised the vehicle. Fox, who has been notoriously unkind to the Volt, showered some praise on Monday morning. Lee Spieckerman of Spieckerman Media raved about the Volt while appearing on Fox & Friends. Spieckerman called the Volt a “wonderful vehicle” and "the iPhone of the American car industry.” Spieckerman, a Republican, prefaced his statements by proclaiming that he is a "Texan who loves oil" in attempt to illustrate that even conservatives can enjoy the Chevy Volt.

Aside from Spieckerman, neoconservative publication The Weekly Standard has also begun to speak positively of the Volt. According to Fred Barnes the Volt should no longer be associated with President Obama or any political party. “It’s not Government Motors anymore. Nor is the green-tech Volt—part electric, part gas powered—being produced at the insistence of the administration. The Volt is not an Obamacar or an Obamamobile. It’s been in the GM pipeline since 2006. Back then, Obama was a senator and GM needed an answer to a political environment that frowned on SUVs and trucks, the company’s gas-guzzling mainstays,” said Barnes.

All of the positive press bodes well for Chevy, who was forced to halt production on the Volt at the beginning of March due to poor sales. Chevy shut down production for five weeks, temporarily laying of 1,300 workers. Production is slated to restart on April 19.

Although not as popular as his siblings George and Jeb, Neil Mallon Pierce Bush is a well-known Texas businessman. Bush is the co-founder of Ignite! Learning, educational software company and is the Chairman of the Points of Light Institute, a foundation that works to increase global volunteer-ism.

danwat1234 wrote on February 16, 2014 - 11:10am Permalink
It is an awesome vehicle, and moddable. In time with the 1st gen Volts entering the used car market, they will become very affordable.

Panasonic Updates Profit Forecast, Noting How Much Tesla Batteries Help The Jump
2022 Porsche 911 GT3 Laps Nurburgring in 7:04 With Journalist Behind The Wheel
END_OF_DOCUMENT_TOKEN_TO_BE_REPLACED