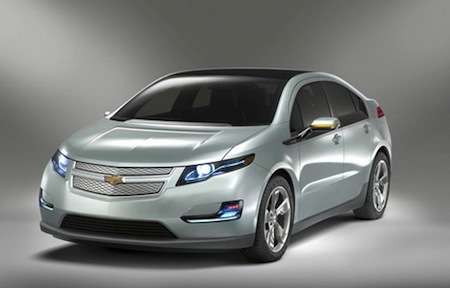 Just one day after GM reported positive Volt sales in February, the automaker is ceasing production for 5 weeks due to overall poor sales.
Advertisement

Despite a strong February, in which sales nearly doubled, GM has decided to cease production on the Chevy Volt for 5 weeks. The shut down will take place at the Detroit-Hamtramck plant from March 19 to April 23 and result in the temporary layoff of 1,300 workers. GM cited poor sales as the reason for momentarily ending production. GM addressed the news in a tweet today that stated: “We stand behind the vehicle & tech. We’re adjusting for market demand and see great potential.”

The news comes just one day after GM announced that the Volt sold 1,023 vehicles in February, up from just 603 in January. The Volt’s sales figures seemed to indicate that the electric vehicle had finally rebounded from last year's battery fire issues, which contributed to a dip in sales. Volt sales even beat out rival Nissan Leaf by more than 2 to 1 in February. Notwithstanding, the Volt’s overall sales figures have been disappointing. GM originally set out to sell 10,000 Volts in 2011, but drastically missed the mark selling just 7,671.

Aside from an upward trend in sales, the Volt also received a ringing endorsement from President Obama on Tuesday when he stated his desire to purchase a Volt after his presidency ends.

“I got to get inside a brand-new Chevy Volt fresh off the line,” said President Obama. “Even though Secret Service wouldn’t let me drive it. But I liked sitting in it. It was nice. I’ll bet it drives real good. And five years from now when I’m not president anymore, I’ll buy one and drive it myself.”

Although President Obama’s approval may appeal to some, it did not do Chevy any favors on Friday. Rep. Darrell Issa (R-Calif.) stated that the temporary layoffs further illustrate that the Obama administration's support of the Volt and EVs in general "has failed.”

“Even as gas prices continue to climb, President Obama’s attempt to manipulate the free market and force consumers into purchasing electric vehicles like the GM Volt has failed despite the use of taxpayer dollars to prop up production. Now some 1,300 workers will pay the price for this misguided experiment,” Issa added.

The Volt’s lack of success has been linked to Obama from the beginning, since his auto bailout helped restructure GM during the 2008-2009 economic crisis. Although many on the right have attacked Obama for his massive bailout of the auto industry, rescue measures were initially taken during the Bush administration. President Bush gave $20 billion to the Big Three automakers, while Obama added an additional $60 billion.

Despite sluggish sales, the Volt has been highly praised by critics and has received countless awards including the 2011 North American Car of the Year, Motor Trend 2011 Car of the Year, Automobile Magazine 2011 Automobile of the Year and a #1 Owner Satisfaction rating from Consumer Reports. Although accolades may allure some, it is the Volt’s hefty price tag that has dissuaded most consumers. The average Volt costs $32,000, even after a $7,500 federal rebate.

Stay tuned for additional statements from GM as the story continues to unfold.