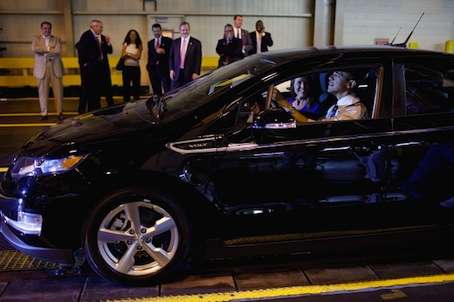 It seems the Chevy Volt has been primarily associated with political banter opposed to automotive news as of late. Whether it was Newt Gingrich’s absurd assertion that Volt was too wimpy to handle a gun rack or Republicans accusing the Obama administration of hiding the Volt’s fire risks, the Volt has become a political target. Despite the negative political attitude toward the Volt, the electric vehicle does have one supporter: President Obama. The President told a crowd at the United Auto Workers conference on Tuesday that he intends on purchasing a Chevy Volt when he leaves office. According to President Obama he will by a new Volt after his second term in office.

"I got to get inside a brand-new Chevy Volt fresh off the line — even though Secret Service wouldn't let me drive it," said President Obama. "But I liked sitting in it. It was nice. I'll bet it drives real good. And five years from now, when I'm not president any more, I'll buy one and drive it myself. Yes, that's right."

President Obama’s statement was greeted with thunderous applause, likely due to his insinuation of his reelection. The President also managed to take a swipe to Mitt Romney who opposed the auto bailout.

“Think about what that choice would have meant for this country, if we had turned our backs on you, if America had thrown in the towel, if GM and Chrysler had gone under. The suppliers, the distributors that get their business from these companies, they would have died off. Then even Ford could have gone down as well. Production shut down. Factories shuttered. Once-proud companies chopped up and sold off for scraps. And all of you, the men and women who built these companies with your own hands, would have been hung out to dry.”

The president’s support comes as no surprise since the Obama administration bailed out GM, the Volt’s manufacturer. Obama has stated that he wants there to be 1 million electric vehicles on the road by 2015 and hopes that the Volt leads this revolution.

Despite President Obama's expectations, EV sales have been disappointed at best. GM sold just 7,671 Volts in 2011, which was short of its goal of 10,000. Part of the reason for the Volt’s lack of success and EVs in general, is the newness of the technology. Consumers have not been willing to fork over their paychecks for what they see as an expensive vehicle with possible safety risks. Adding to this uncertainty are the Volt recalls of 8,000 cars and battery fires reported by the National Highway Traffic Safety Administraion.

In order to make the Volt and other EVs more attractive to consumers President Obama has proposed increasing the tax credit for electric vehicles from $7,500 to $10,000. The current tax credit applies to the Chevy Volt, Nissan Leaf, Tesla Roadster and Tesla Model S. Notwithstanding President Obama’s desire, his proposal has faced much criticism in Washington. Republicans have argued that an increased tax credit is unjustified because plug-in EV sales have not met sales goals.

The Volt sold just 603 vehicles in January 2012, well below its December 2011 total of 1,529 units sold. Whether increased tax credits and a recent HOV approval in California will give the Volt the push it needs with consumers will remain to be seen.