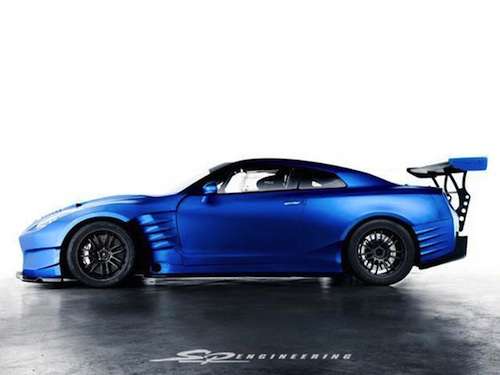 Although this isn't the first Nissan GT-R featured in the Fast and the Furious franchise, it just might be the best. Not only does the modified GT-R boast 685 horsepower, it also features a customized body kit. Keep reading for more details, as well as to see a video from R's Tuning.
Advertisement

Let’s face it, there’s really only one aspect of the Fast and the Furious franchise that keeps it from getting stale: the cars. Although each installment typically revolves around federal agents trying to track down Vin Diesel, at least there are tricked out cars to look at.

Not surprisingly, the franchise’s sixth installment will be no different. Aside from a familiar plot, The Fast and the Furious 6 features a plethora of striking rides including the newly unveiled Nissan GT-R R35. Not your ordinary GT-R, a dream team of tuners including R’s Tuning, Switzer Performance, Cobb, HKS and BenSopra modified the vehicle. Performance-wise, this electric blue GT-R pounds out nearly 685 horsepower and 603 pound-feet of torque.

This is not the first time a Fast and the Furious film has starred a Nissan GT-R. In fact, the GT-R was briefly depicted in Fast Five. Additionally, a 1999 Nissan Skyline GT-R was featured in 2 Fast 2 Furious.

Aside from the Nissan GT-R, The Fast and the Furious 6 also boasts a 2013 Subaru BRZ. In October, it was confirmed that Subaru had supplied the film’s crew with five BRZs. There is no word yet on the vehicle’s modifications, but filmgoers can expect to see an upgraded Subaru BRZ. Modifications aside, the stock BRZ comes with a 2.0-liter l-4 engine, which produces 200 horsepower and 151 pound-feet of torque. Not to mention, the standard BRZ goes from 0-60 mph in 6.4 seconds.

The Fast and the Furious franchise has grossed nearly $1.6 billion worldwide since the series’ first installment was released in 2001. In fact, 2011’s Fast Five grossed more than $626 million worldwide, making it the series’ most profitable entry. Fast Five proved so successful that the franchise’s sixth and seventh installments were simultaneously announced following its release.

The franchise’s sixth chapter revolves around Dominic (Vin Diesel), Brian (Paul Walker) and the rest of the crew attempting to pull off a European heist, while federal agent Hobbs (Dwayne Johnson) is trying to track them down. The movie also stars Michelle Rodriguez, Jordana Brewster, Tyrese Gibson and Gina Carano.