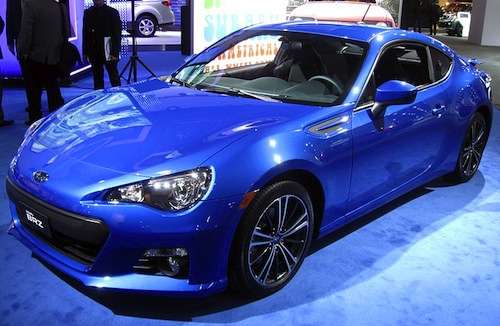 The BRZ becomes the second Subaru to be featured in the popular series. A Subaru WRX STI previously appeared in 2009's 'Fast & Furious.'
Advertisement

The 2013 Subaru BRZ is set to appear in the upcoming Fast and the Furious 6, according to Motor Trend. Subaru has apparently supplied the film’s crew with five BRZs, but there is no word as of yet how many will appear on screen. If the vehicles featured in the previous Fast and the Furious films serve as any indication, the on-screen BRZ will likely tout a stylish body kit and new rims.

Not surprisingly, the stock 2013 BRZ will also undergo a major upgrade under the hood. Without any improvements, the standard Subaru BRZ still boasts a 2.0-liter I-4 engine, which pounds out 200 hp and 151 lb-ft of torque. Additionally, the BRZ goes from 0-60 mph in 6.4 seconds.

Although not official, Motor Trend states that Fast Six (unofficial title) stars like Vin Diesel, Paul Walker, and Dwayne Johnson may drive the BRZ. The latest installment of the Fast and the Furious franchise will also star familiar faces like Michelle Rodriguez, Jordana Brewster, and Tyrese Gibson; along with series newcomers like MMA star Gina Carano.

Aside from the major star power provided by its actors, the Fast and the Furious series has accrued much popularity due to the countless vehicles it features. Notable standouts include the 1995 Toyota Supra, 1995 Honda Civic, 1994 Acura Integra, 1995 Mitsubishi Eclipse, 1999 Nissan Skyline GT-R, 2006 Nissan 350Z, and the 1970 Dodge Charger R/T featured in Fast Five.

There have been no official reports hinting at what other vehicles viewers can expect to see in the upcoming action movie. That said, a newly released on-set video shows a military tank and an unidentified muscle car.

The Fast and the Furious series has grossed nearly $1.6 billion worldwide since the first movie was released in 2001. In fact, last year’s Fast Five grossed over $626 million worldwide, making it the franchise’s most successful entry to date. Due to the film’s success, the series sixth and seventh installments were announced simultaneously in late 2011 by star Vin Diesel.

Fast and the Furious 6 centers on Dominic (Diesel), Brian (Walker) and the rest of the crew attempting to pull off a heist in Europe. Once again, federal agent Luke Hobbs (Johnson) is trying to track them down.

Stay tuned for vehicle updates as they continue to surface. Viewers that wish to be surprised can wait until May 24, 2013 when Fast Six hits theaters.