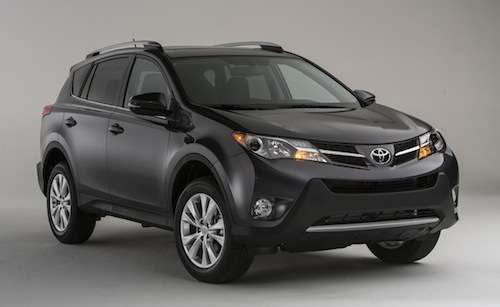 Toyota has increased the price of its base model RAV4 by $650, but decreased the price tag of the higher end RAV4 Limited. Each all-new 2013 Toyota RAV4 model features an extensive interior and exterior overhaul.
Advertisement

The new RAV4 is prices higher than competitors like the 2013 Honda CR-V and the 2013 Ford Escape, but less expensive than the 2013 Hyundai Santa Fe.

Performance wise, all 2013 RAV4 models will be equipped with a 2.5-liter four-cylinder engine and a six-speed automatic transmission. Not surprisingly, Toyota was able to dramatically improve the RAV4s fuel efficiency by ditching the V6 option and equipping all models with the more economical four-cylinder alternative. In fact, all FWD models received an EPA-estimated fuel efficiency rating of 24 mpg/city and 31/highway. Each AWD model features an EPA-estimated rating of 22 mpg/city and 29 mpg/highway.

Introduced in 1996, the Toyota RAV4 was the very first compact crossover SUV. Designed for drivers craving the benefits of a SUV with increased fuel economy, the RAV4 paved the way for vehicles like the Honda CR-V, Subaru Forester and Ford Escape.