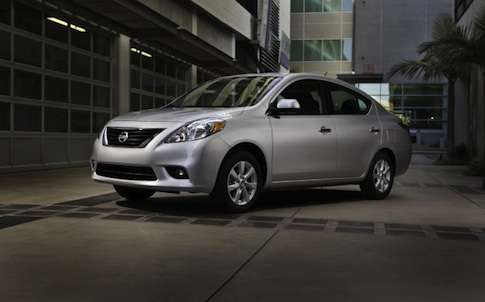 Some 36,000 Nissan Versa owners are expected to receive recall notices, due to a faulty shifter.
Advertisement

Nissan issued a recall today on 36,608 2012 Versa sedans built between June 9, 2011 and January 13, 2012, due to a gearshift defect. The safety recall only relates to Versas with the Xtronic CVT automatic transmission and does not affect five-speed manual transmission models.

According the National Highway Traffic Safety Administration, the Versa may be shift out of the park position without first depressing the brake pedal. If this occurs, the likelihood of a collision with another vehicle and/or pedestrians is increased. The defect is reportedly the result of interference between the shifter rod and shift knob.

In a statement to the federal government, Nissan says that they discovered the issue last November during dealer vehicle inspections. The shifters in question were built in Mexico by GHSP Mexico. GHSP, a global supplier of mechanical parts, has been producing shifters in their Mexican branch since August 2011. Aside from Nissan, GHSP Mexico also supplies parts to GM, Ford, Chrysler, Toyota, Fiat and Audi. Although GHSP manufactures shifters for other Nissan models, Nissan has stated that the Versa is the only affected vehicle.

The news comes less than a month after Nissan’s announcement that they plan to build a new $2 billion plant in Mexico to manufacture exclusively small cars. Although not confirmed, likely small car candidates would include the Versa and Sentra. The new plant will be located near the GHSP Mexico factory and is set to begin production in late 2013.

Introduced in North America in 2006, the Nissan Versa is a sub-compact car available in sedan and hatchback. With a base MSRP of under $11,000, the Versa is the most affordable and best-selling car in its class. In 2011, Nissan sold a record 99,730 Versas, outselling competitors like the Chevy Sonic, Hyundai Accent, Toyota Yaris and Honda Fit.