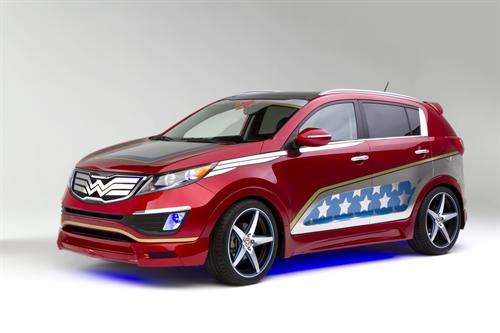 Wonder Woman gets her own 2013 Kia Sportage

Kia is busy building themed vehicles for the characters of the Justice League. The seventh of those is dedicated to Wonder Woman, with a red, white and blue schema and special storage compartments for her tiara, wristelets, whip and accessories.
Advertisement

I will freely admit that my first crush was Linda Carter as Wonder Woman. For some guys, the life-long fantasy is Princess Leia in the bronze bikini. For me, it's Wonder Woman in her gold-enhanced bodysuit. She fought for justice and looked sexy doing it.

Now, she's back.. or at least, her theme is. This time, the justice is part of the We Can Be Heroes campaign, a relief effort to bring help and hope to people affected by the hunger crisis in the Horn of Africa. The Wonder Woman-themed 2013 Kia Sportage is part of an eight car lineup of Justice League-themed cars and is the final character-themed car in the group. The last car, to be unveiled soon, is an amalgamation of the other seven.

Wonder Woman, of course, is the only Justice League member of note, but for those DC Comics fans who are wondering, the other six cars are themed after Superman, Batman, Green Lantern, The Flash, Aquaman and Cyborg.

The Wonder Woman-inspired 2013 Sportage is fully customized for the super heroine's needs. It's been outfitted with a special aero kit to streamline its looks, boost economy, and convey power. The Wonder Red paint is detailed with a blue field outlined in gold with white stars. The grille is Wonder Woman's eagle chest-plate emblem while her piercing blue eyes can be seen in the headlights. The windshield has her tiara as a banner piece and a golden trim wrap accents the body edges. Chrome side panels hint at her invisible jet and the five-spoke wheels are more stars from her cape.

Red upholstery and dash pieces as well as blue LED lighting adorn the interior. Custom seats feature the Wonder Woman logo. The rear cargo area is adorned with stars and has a large, see-through panel inside which Wonder Woman's tiara, bracelets and Lasso of Truth are stored.

“It’s exciting to join Kia in revealing the final car to represent a member of the Justice League, Wonder Woman, at the New York Auto Show,” stated Jim Lee, co-publisher of DC Entertainment. “This joint effort to raise awareness for the ‘We Can Be Heroes’ giving campaign continues to be a huge draw for fans across the country, and I’m sure New Yorkers will agree that the new Wonder Woman-inspired Sportage is a ‘must see’ feature at the show.”

The We Can Be Heroes Giving Campaign is an outreach program from DC Entertainment meant to raise awareness and funds to fight the hunger crisis in the Horn of Africa. Funds raised will go to the three humanitarian organizations working in Africa: Save the Children, International Rescue Committee and Mercy Corps. The campaign raised almost $2 million in 2012 for the people of Ethiopia, Kenya and Somalia. Learn more about WeCanBeHeroes.org.