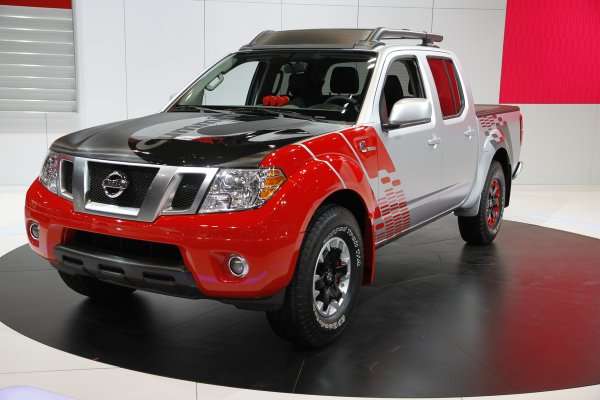 Who would buy a Nissan Frontier Diesel?

Light-duty diesel pickup trucks are now the rage, with everyone talking about or offering one in the 1/2 ton range. Nissan recently premiered the Frontier Diesel Runner as a test bed for consumer reaction. So what has that reaction been?
Advertisement

Earlier this month, Nissan unveiled the Frontier Diesel Runner Project as a showcase of both the Nissan Frontier in its 4x2 package (which does not generally sell well) and its new partnership with Cummins, who makes diesel engines. It's also showcasing something that Nissan has been doing in partnership with Cummins for a U.S. government test program.

We already knew that a big Cummins 5.0L diesel will be powering the next-generation Titan full-sized truck, but many were caught off guard that the little Frontier was being shown off with a diesel engine in Chicago. Nissan said it was to test consumer reaction to a diesel option, but it was just as much a test of the media's reaction and the rest of the industry's response.

Most people didn't really notice, but when General Motors showed off the new Colorado mid-sized pickup, they mentioned diesel as a powertrain option for the truck. This would've made it the only diesel-powered mid-sized pickup truck offering. Toyota has no obvious plans for offering one in their Tacoma. Currently, those three trucks are the only options in the mid-sized market and of the three, the current-generation Frontier has lackluster fuel economy by comparison.

Now we put two and two together. Consumers will be excited about a diesel truck option. Look at the Ram 1500 diesel, which has already pre-sold its entire production run. That alone should tell us that, at the very least, the dealership network is convinced that these will sell like hotcakes. Dealerships rarely put their money into something new if they don't have a good indication that it will move off their lots.

Now add in a third metric here: CAFE. The Corproate Average Fuel Economy requirement for trucks is the current Achilles heel for the automotive industry. Although the requirement for cars got all the press, those requirements were very nearly met before the standards were even finalized and announced. Automakers have had the capability to meet 55 mpg ready to roll for some time now and have been merely perfecting those technologies before rolling them out to the world. With trucks, however.. well, not so much. Hence Ford's sudden gamble with aluminum lightweighting, Ram and Jeep's sudden introduction of eight-speed transmissions across the line, GM's sudden push for Ecotech engines in their truck line, and new talks of diesel in light-duty offerings.

Enter the ATLAS project in which the 2.8-liter diesel powering this Frontier Diesel Runner show truck was born and raised. This is a light-duty diesel engine producing about 200 horsepower and 350 lb-ft of torque. That's nothing to shake a stick at in the small truck segment, obviously, but it's not mind-blowing power compared to the kind of juice sitting in the Titan diesel when it hits the streets (550 lb-ft?!).

This engine and its accompanying 8-speed transmission would give the Frontier an instant 35 percent improvement in both power output and fuel economy. In small trucks, that's a huge jump ahead of the competition. We'd be looking at a small truck who's highway MPG would be pushing into the mid-25 or even 30 mpg range, depending on 2WD or 4WD choice. For example, the current 2WD Frontier achieves 23 mpg on the highway. Add 35 percent to that and you're over 30mpg. Even compared to the V6 gasoline option.

As diesel engines enter a new vogue with American buyers, especially in trucks now that they’ve been powering heavy-duty trucks for decades, the time may be ripe for Nissan to get on board a mid-sized diesel offering. Especially if they want to keep competing against sales leader Toyota and returning newcomer GM.

There seems to be a market for a full-sized half-ton with diesel, so it should follow that a mid-size with diesel would also sell well. Nissan has little to lose by offering this option and much to gain. We can further assume that if the Frontier gets a diesel option, its SUV twin the Xterra would as well.

Jeff wrote on February 27, 2014 - 4:42pm Permalink
Would love to see this come through for the diesel fans. Would prefer to see it matched with a 6 sod gearbox.
Aaron Turpen wrote on February 28, 2014 - 1:19am Permalink
The eight-speed gives far more efficiency. Although they haven't talked about the 4WD option, I would love to drive one offroad with the Pro4X package and these eight gears.