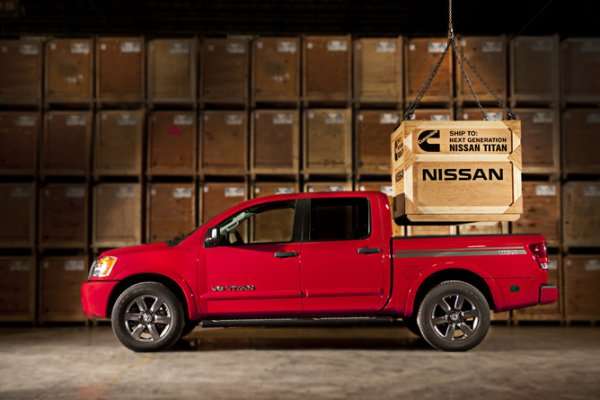 The Titan, Nissan's full-sized truck, will be getting a V8 turbo diesel option in its next overhaul. The new 5.0-liter diesel engine is currently undergoing testing in engineering test beds at Nissan.
Advertisement

In the arena of full-sized, half-ton pickup trucks, the Nissan Titan has always been the odd man out. The Titan is a respectable truck, but mainly sells in the consumer market with commercial sales usually going in favor of the Detroit 3. That may change as the Titan is about to become the first full-sized half-ton to sport a V8 Cummins Turbo Diesel engine.

The announcement earlier this year from Ram Truck, saying they would be offering a diesel (in their case a V6, read about it here) in the 1500 was met with cheers from the press. That 3.0-liter V6 diesel is impressive and probably exactly what the doctor ordered for a truck of this size. Nissan, however, thinks there's a market for an even bigger, more capable engine and will be offering a huge V8 5.0-liter Turbo Diesel from Cummins in the Titan when the next-generation of that truck debuts, probably as a 2015 model.

The Titan suffers from several issues that keep it from becoming mainstream. First, it is available in only one powertrain configuration, though that is a more than capable 5.6-liter V8 gasoline engine. Next, its five-speed transmission, 13/18 or 12/17 (city/highway, 4x2 or 4x4) fuel economy, and relative newness to the market are all factors holding it back. For the next-generation upgrade, however, Nissan has promised several things that will remedy some of those issues.

More powertrain options have been promised, which will include this segment-leading diesel engine, as well as other improvements and options that will be more on par with the expectations of the market. We can only hope that this will include a transmission with more speeds, a more fuel-efficient gasoline option (at least for the 4x2), etc.

The Titan is built at Nissan's Canton, Mississippi plant with development and engineering taking place in Franklin, Tennessee, Farmington Hills, Michigan, and Stanfield, Arizona. Design is lead by Nissan's design team in La Jolla, California. The Titan itself is only sold in select markets with North America being its largest. Cummins builds its engines in Columbus, Indiana.