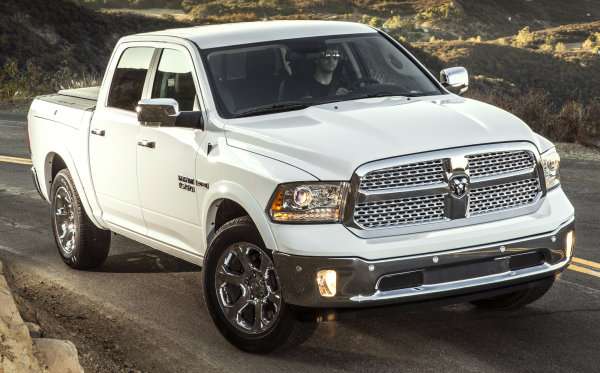 The Chrysler Group has announced that in the first three days of taking orders on the new 2014 Ram 1500 EcoDiesel, they have received orders for all 8,000 trucks planned during the initial production run – clearly showing that the critics were very, very wrong in thinking that a half ton diesel pickup wouldn’t succeed.
Advertisement

The consumer market has been demanding a half ton diesel pickup for years, but until the 2014 Ram 1500 EcoDiesel arrives no automaker has been willing to take up the challenge. Those wanting for a diesel half ton Ram look forward to the combination of great fuel economy and the ability to do just as much hard work as most big V8s. Critics of the half ton diesel Ram insisted that the added price of the diesel engine option would counter any savings at the pump and because of that, the consumer market would not be all that interested in buying a diesel powered Ram 1500. Man, were those critics wrong.

The 2014 Ram 1500 EcoDiesel officially went on sale on Friday, February 7th and by Monday February 10th, dealerships around the country had officially placed orders for 8,000 examples of the Ram 1500 EcoDiesel – literally selling out of the entire first production run planned to start later this month. Because of that, the ordering process has been closed for the 2014 Ram 1500 EcoDiesel until sometime in March. That figure is even more impressive when you consider the fact that February 7-10 covers a weekend and dealerships weren’t even open during one of those days so the first batch of Ram EcoDiesel pickups sold out over the course of a Friday afternoon, a Saturday and a Monday morning.

Remember, critics insisted that the Ram EcoDiesel wouldn’t sell due to the several thousand dollar markup that comes with the new diesel V6 while in reality – the new diesel half ton pickup accounted for more than half of all Ram truck sales during that short sales period.

“The Ram 1500 is the only half-ton truck available with a diesel, so we see this as incremental business by having the only truck that can offer best-in-class fuel economy of 28 MPG combined with 9,200 lbs. of towing capacity,” said Reid Bigland, President and CEO — Ram Truck Brand, Chrysler Group LLC. “It’s every truck manufacturer’s dream to have this kind of initial order demand for a product. Fuel economy is the No. 1 request of half-ton buyers and the Ram 1500 EcoDiesel delivers without compromising capability.”

While the $2,850 price of the EcoDiesel option might seem hefty to some buyers, we should keep in mind that the 2014 Ram 1500 EcoDiesel is currently the most efficient half ton truck sold in America with a highway rating of 28mpg while still being able to tow 9,200 pounds. No other full size truck on the market offers fuel economy in the same ballpark as the EcoDiesel Ram and those trucks that do get kind of close don’t offer nearly the same level of capabilities.

Just for the record, the next most fuel efficient half ton truck sold in America is also the Ram 1500 powered by the 3.6L Pentastar V6. That truck offers 25mpg on the highway, but it can’t do the same amount of hard work as the new EcoDiesel V6. I have driven the Ram 1500 EcoDiesel and I was amazed at the amount of power offered by this diminutive diesel mill so I have no doubt that buyers will love the mix of power and fuel economy.

Considering the insanely high demand for the new 2014 Ram 1500 EcoDiesel, other automakers are more likely to proceed with half ton diesel truck plans, but maybe not right away. We know that both Nissan and Toyota are working on a half ton truck with a V8 Cummins diesel engine and there have long been rumors that both Ford and General Motors have also spent some time considering a half ton diesel. Should the popularity of the EcoDiesel Ram continue once the ordering process reopens in March – even if at only a fraction of the same level – we can expect to see GM and Ford roll out plans for a half ton diesel option in the near future.