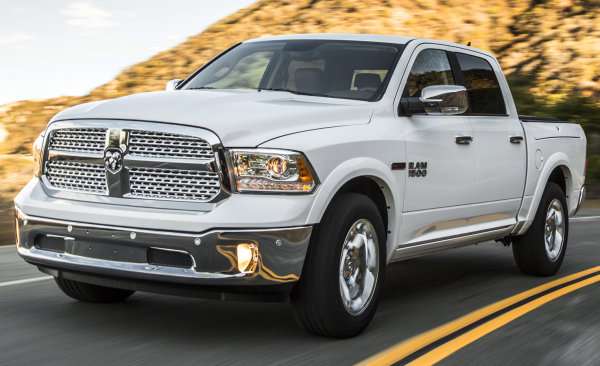 The Chrysler Group has announced the official EPA fuel economy ratings for the 2014 Ram EcoDiesel pickup and with a highway number of 28 miles per gallon – this new diesel Ram 1500 is the most efficient half ton pickup ever.
Advertisement

The 2014 Ram 1500 EcoDiesel in rear wheel drive form has been rated by the Environmental Protection Agency as achieving 20 miles per gallon in the city, 28 miles per gallon on the highway and a combined figure of 23 miles per gallon. Those numbers comfortably make the 2014 Ram EcoDiesel the most fuel efficient full size truck ever sold in America and more impressively – this powerful half ton diesel Ram is also more efficient than both of the most popular midsized trucks including the Toyota Tacoma and the Nissan Frontier.

In other words, whether you are shopping for big trucks or small trucks, the 2014 Ram 1500 EcoDiesel offers THE best fuel economy among trucks sold in the USA.

Now there are some critics who don’t believe that the 2014 Ram 1500 EcoDiesel will be as popular as Chrysler is hoping due to the higher price of diesel fuel coupled with the lower acceptance rate of diesel technology in the United States. The average American consumer has warmed up a bit to the idea of clean diesel technology but there is no denying the difference in fuel prices but the in the long run – it costs less to feed the EcoDiesel than it does the next most efficient (non-Ram) truck.

While saving $10 doesn’t seem like all that much, that is only over the course of 500 miles so imagine the savings over the course of 100,000 miles and even with the lesser fuel economy around town – Ram EcoDiesel owners will be able to save a significant amount of money compared to the Ford EcoBoost. Not only does the EcoDiesel beat the EcoBoost...but it beats it very badly.

By the way, I should point out that the second most fuel efficient half ton truck in America is the 2014 Ram 1500 with the Pentastar V6 – a truck which can hit 25mpg on the highway but that base V6 doesn’t offer the same amount of power or capability as the EcoDiesel. Now that Ram has the two most efficient trucks in America, we can expect Ford to counter with the next generation F150 that debuted 700 pounds lighter than the current models at the Detroit Auto Show.