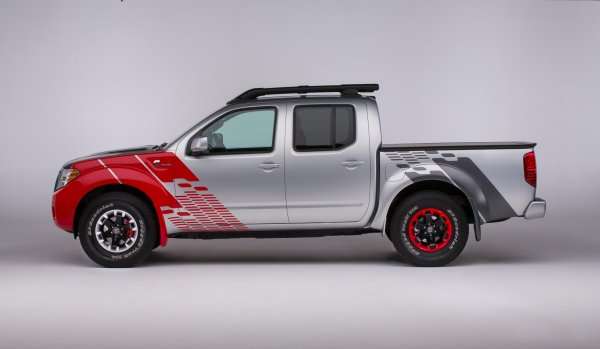 A Nissan Frontier outfitted with a Cummins turbo diesel engine is being highlighted in Chicago this year, with the 2.8-liter, 200 horsepower, 350 lb-ft engine produces lustful fantasies for small truck lovers.
Advertisement

The concept truck combines a Nissan Frontier Desert Runner 4x2 pickup truck with a new 2.8-liter Cummins turbo diesel engine in what Nissan is saying is a project concept to gauge customer interest in a diesel-powered mid-size pickup. So far, reaction from the press and public has been largely positive. The market may be ready for a diesel option in a small truck.

The truck is being called the Frontier Diesel Runner Powered by Cummins and comes just six months after Nissan announced that Cummins would be providing a big 5.0-liter diesel engine for the full-sized Titan pickup's next-generation offering. That truck, the design for which is expected to debut later this year, will become available, Nissan says, in 2015.

The Nissan Frontier is a popular midsize pickup, competing with the Toyota Tacoma as the only two offerings in that space for consumers. Many have talked about offering a diesel in the segment, but it's rarely taken beyond that, though a few have tried in the past. Toyota has made no indication that they'll be embracing diesel of any kind anytime soon, so that leaves Nissan. “Nissan has always valued the mid-size pickup segment, and with this technical study project, we are looking to explore what is possible for the next-generation Frontier. We are always looking for ways to engage our customers, innovate and take the segment in an evolutionary direction," said Fred Diaz, senior VP, Sales & Marketing, Parts & Service, U.S.A. Nissan North America.

The Frontier Diesel Runner Powered by Cummins has a 2.8-liter, four-cylinder diesel engine designed to meet or exceed emissions standards while delivering about 200 horsepower and 350 lb-ft of torque. Fuel economy is about 35 percent higher than the Frontier V6 two-wheel drive in the 2014 line.

The economy comes from a combination of the diesel engine's inherent fuel efficiency over gasoline coupled with a new eight-speed automatic transmission. Payload and towing will be similar to the Frontier V6 as well, though other capabilities are increased due to the higher power of the diesel over its gasoline counterpart - things like better traction, faster 0-60 speeds, and so forth.

The impetus for this diesel-powered Frontier concept actually began in 2010 when Nissan and Cummins joined the U.S. government's ATLAS project to test next-generation four-cylinder diesel engines in light automotive (ATLAS stands for Advanced Technology Light Automotive Systems). This shaped the engine now being showcased at the Chicago Auto Show.

“We’ve been building pickup trucks in the U.S. for more than 30 years and selling them here for even longer than that, even offering 4-cylinder diesel in our U.S. pickup truck in the 1980s,” said Pierre Loing, vice president, Product Planning, Nissan North America. “With this Frontier Diesel Runner project truck, we can reflect on our extensive heritage while also looking to the future and the changing demands of mid-size pickup buyers.”

Other elements of the truck are taken from the Frontier Pro-4X, including the 16-inch wheels (custom painted for this truck).

While the show vehicle on display in Chicago is meant to give the public an idea of the concept and gauge their response, a second prototype is being used as a development vehicle for real-world testing and lab-based abuse.

“We hope consumers in Chicago and across the U.S. will let us know what they think of the prospects of a diesel engine in this segment,” Loing stated.

Trent wrote on February 7, 2014 - 5:06am Permalink
Most people in North American don't realize that Toyota Hilux and Nissan Narvana have mid size diesels already. I'm currently in the Fiji Islands and looking into buying a Nissan 2.5 narvana (looks like Frontier) with darn near 40 MPG. Diesel fuel cost less then Petrol outside the US so there something not adding up in all this. US always gets the worse model selections. Look at the Toyota Prado 7 passenger 6 cylinder inter-cooled diesel. Great SUV. US gets the V8 gas guzzler. US needs more diesels but I don't understand why the fuel cost so much in North America. That's the real issue. It costs less to refine. Seems to be a racket going on.
Aaron Turpen wrote on February 7, 2014 - 12:21pm Permalink
It's oil content and taxes. The oil content of diesel is higher and the taxation on it is higher than gasoline.
Parks McCants wrote on February 7, 2014 - 4:53pm Permalink
On the West Coast, the refining of diesel fuel is confined to three locations. Inevitably one of them is " always" temporarily in " shutdown" mode. Also, commercial fuel seems to take precedent over # 2 and is offered at a discount for haulers with a federal PUD #. While it's true that diesel fuel in its original formulation does contain a higher percentage of crude distillates, all diesel fuel vehicles including the future Frontier will run on " Bio-diesel. And unlike ethanol blended gasoline, a percentage of Bio-diesel can be extracted from filtered used cooking oil, hemp, etc. As stated by Trent, I too believe that the consumer is being held hostage by a very regulated, environmentally hobbled diesel fuel refinery and distribution network. Historically, diesel fuel in the U.S. has been priced below unleaded regular gasoline. We're looking at the cause and effect of worn-out 50+ year old refineries, E.P.A. mandated ecological restraints, and an industry that gleans a higher profit off of gasoline, federally subsidized corn based ethanol, and the very monopolized, truck industry prioritized commodity. The pump price of on-road non PUD automotive diesel will drop when heavy road taxes are reduced or removed from the pump price, and, Standard Oil, Texaco, British Petroleum, steps up and builds several new Eco-friendly diesel fuel refinery in the U.S...
Aaron Turpen wrote on February 7, 2014 - 6:24pm Permalink
Perfectly on point, Parks. When I was driving a truck over the road, we would often fuel outside of California before driving in (in Nevada or Arizona usually) because even with all of the breaks the Californai government attempts to give diesel fuel for commercial use, it's still way more expensive in CA than it is in most neighboring states. Here where I live now, in Wyoming, our fuel prices (gas or diesel) are often far lower than the national average for the opposite reason: restrictions on producing it are far lower and yet we somehow have clear skies and clean water. Go figure.
Parks McCants wrote on February 7, 2014 - 4:58pm Permalink
B.T.W. Aaron. Good read. Thanks.
Greg wrote on February 7, 2014 - 10:24pm Permalink
Yes, Nissan, bring it on. We want a small diesel pick up. Sign me up.
Chet wrote on February 16, 2014 - 9:44pm Permalink
Looking right now to buy the Ram Eco Diesel, but would love something smaller as I only haul lighter loads but gas mileage still suffers immensely when I do in my Honda Pilot.