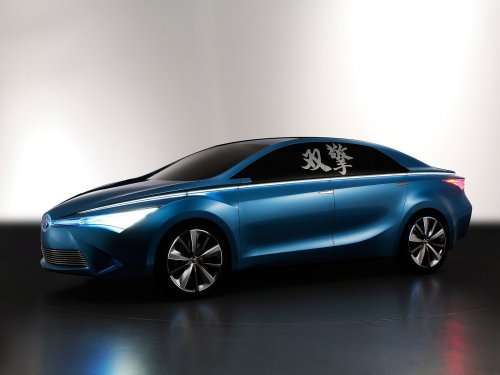 Toyota unveils unique style in Beijing with the Yundong Shuangqing

Toyota has unveiled a unique new coupe concept at the 2012 Beijing Motor Show as a car designed both inside and out to appeal to the Chinese market. Its flowing good looks, however, would look good on any nation's streets.
Advertisement

No matter the car show, concepts that are unveiled generally fall into one of two categories: "Wow" or "Bleh." When Toyota unveiled the unique Yundong Shuangqing concept to Chinese audiences at the 2012 Beijing Motor Show, it was definitely a Wow moment.

The concept gets its name from a Thai Chi stance called "movement upon clouds" (the translation of Yundong) and from the phrase for "dual support" (Shuangqing). This is emblazoned on the windows of the car (see photo).

Following on some great unveils in the U.S. and Europe, with bold statements like the NS4 and FCV-R concepts, this new offering sports a strong centering on the Toyota badge at front and rear. The nose is decidedly stretched to that point, angling as the NS4 does in a way similar to a Cadillac, but with a much more interesting headlamp design that peers more than it gawks. Unlike the NS4, the Yundong has smaller bevels for its fog lamps and a much smaller intake area.

That small intake and the Shuangqing in its name hint at something else: a hybrid drive train developed at the Toyota Motor Engineering & Manufacturing (China) Co, Ltd, the company's research and development center in Changshu, China.

The shape and appeal of the car accentuate aerodynamics while chrome touches, including strips running down either side, keep the bold design from being overly audacious.

No announcements were made for the car's production or release, if any, but the car was showcased as a glimpse into Toyota's plans for hybridization in China, as part of a project underway for nearly two years. The company plans to release hybrid vehicles with Chinese-designed and made components in or around 2015.

Could the Yundong Shuangqing be part of that? Time will tell.