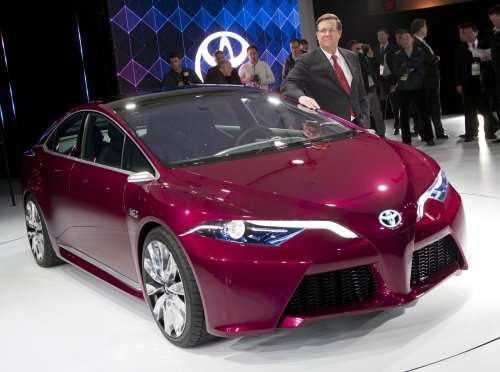 The car combines sleek styling, forward-looking connectivity implementation, state-of-the-art safety features, as well as the company's next-generation hybrid power train. Toyota NS4 unveil was preceded by weeks of hints and teasers. When the curtain finally came off, the buildup was obviously not overdone.

The new showcase for Japan's top automaker carries everything the company hopes to do with its next generation vehicle lineup. Engineers at Toyota designed the mid-sized concept to house all of the technology, gadgetry, and advanced propulsion that will be offered in models by 2015.

The next-generation Hybrid Synergy Drive is a plug-in hybrid system separate from the Prius family and designed to reduce the size and weight of components while delivering higher efficiency. It improves overall fuel economy, offers better acceleration, gives the car a longer all-electric range, and maintains the plug-ins short charge time.

Interestingly, despite this car being a plug-in hybrid, the emphasis was not on its powertrain.

The vehicle of the future, if Toyota and other leading connectivity in-car tech pushers like Ford have it their way, is going to give us easy connections to our phones, Internet, and more. Of course, connected vehicles are the third-fastest-growing technological device (after smartphones and tablets), so maybe they're on to something.

Toyota's emphasis is on seamless vehicle interfaces with emerging technologies like advanced smart phones, digital radio, and more. Partnerships with Microsoft, Intel, and others add to this. In Toyota NS4, these are seen in the “Human-Machine Interface” (HMI) built around a multi-touch screen that looks a lot like an iPhone. It's goal is to mimic our common devices enough that the learning curve towards using it will be small to nonexistent.

Through the HMI, the vehicle's occupants can direct multimedia (radio, integrated DVD players, etc), climate controls, and navigation. Other driver information such as battery charge state and expenditure are also there. The HMI can learn preferences and be customized in its output, making the car more personalized and enhancing information displays to minimize distractions.

Another key feature being showcased in Toyota NS4 concept are safety items, many of which we often take for granted. From a next-gen Pre-Collision System (PCS) to adaptive headlights and even a new type of window glass, the NS4 shows where safety tech is going.

The PCS is a driver alert system that can let the driver know when he or she is moving out of the lane, may be headed for a rear-end (backup) or head-on (pedestrian) collision, etc. It utilizes millimeter-wave radar and stereo cameras plus near-infrared beams for night-time recognition. It's all designed to help avoid collisions and accidents by pre-applying brake pressure and manipulating steering. A Blind Spot Monitoring system is also involved in this collision detection system, giving visual indicators to the driver (on the dashboard) when an object is detected within the usual blind spot zones.

It's an enhancement of the current-generation PCS available on Lexus and Toyota vehicles, adding the rear-end and lane detection elements absent in current technology.

The headlights, meanwhile, get Adaptive Driving Beam (ADB) systems to prevent vision impairment from glare for oncoming drivers and pedestrians. Using a camera mounted behind the front grille and partial shielding inside the lights themselves, the ADB allows near-high beam illumination with automatic damping when objects are detected ahead.

More safety features are found in the bodywork itself. The hood is designed to pop up at the rear, increasing space underneath, which would help reduce pedestrian head injuries from collisions at front in certain speed ranges. Toyota put a lot of testing into this innovation and seems to have hit a winner.

Four new glass technologies top off the safety tech of the NS4. On the windshield and back glass, Hydrophobic coating is added, which causes raindrops to form semi-spherical shapes, improving visibility. An anti-fog film from a high performance resin material also aids in visibility while a high ultraviolent (UV) inner layer removes 99% of all harmful UVA and UVB rays.

All windows also get a new anti-solar film with radio-wave transparency that reduces the internal vehicle temperature and improves the transmissions to and from common electronic devices like cell phones, WiFi, radios, etc.

Toyota vs Tesla: Which Stock To Buy These Days
For Some Former Daimler Managers Daimler Is Authority, While Tesla Is Like a Startup
END_OF_DOCUMENT_TOKEN_TO_BE_REPLACED