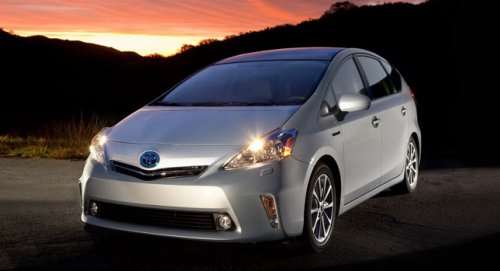 Toyota Prius V - half minivan, half station wagon, all hybrid

Toyota Prius V arrived in showrooms last October and has shown steady, though not spectacular sales since. The "station wagon Prius," as it's been called, has also been labeled a "Prius minivan" by some. In reality, it's not really either of those things, but it is a hybrid.
Advertisement

In Europe, they have a very different take on minivans than we here in North America do. That is where the confusion over the Prius V's market sector comes in. Here in the States, Toyota Prius V is a compact station wagon. It seats five, uses the same plug-in hybrid powertrain as the standard Prius, but without any significant styling changes outside of the rear hatch.

Imagine if you took a bicycle pump, attached it to a 2012 Prius model, and inflated it a little. You'd have the Prius V at 1 inch wider and 5 inches longer than the standard Prius. Most of the increased interior space comes from this expansion plus a change in the curve of the rear hatch, which is less pronounced than it is on the standard Prius model.

The size inflation means that it has 34.3 cubic feet of cargo space (roughly 50% more) and slightly more leg and head room. Under the hood, though, the two Pri are identical with the same 1.8L Atikinson cycle in-line four cylinder engine, the same 60 kilowatt motor, and the same Hybrid Synergy Drive system using the same 201 volt nickel-metal hydride (NiMH) battery pack. The car can go all electric for almost a full mile - enough to run over to the Post Office or the corner grocery for many of us.

The larger car size means the Prius V has lower fuel economy than its standard brother Prius. The EPA gives it a 44 city, 40 highway rating (42mpg combined) compared to the standard PHEV Prius with its 50mpg combined mileage. The "v" in the Prius V's name stands for "versatility," Toyota says. That's a little subjective, though the larger size of the V does mean that it will be a lot more useful for the average family than the Prius. What the car doesn't have are looks.

In fact, like the other Prius models, style is not in the bargain at all. Of course, the V should be compared to other station wagons and (perhaps) minivans. Not exactly a market segment known for its hipster good looks. Still, the Prius V isn't any worse than the others in this segment, though Honda does have the advantage given that they used a Judas Priest song in advertising for the Odyssey.

One thing the Toyota Prius V doesn't have at all is get-up-and-go or any type of "fun" in the description of the driving experience it provides. The V is made to do two things, neither of which is sexy: seat 5 people and get them places, with all their stuff, without using a lot of fuel. That's what it does and that's all it does.

For the money ( $26,400 base MSRP), the Prius V is a solid family get-around car that fits the needs of the average urban or suburbanite family well.

Barb M wrote on January 22, 2012 - 10:25pm Permalink
I bought this car in December and love it. I disagree with the comment that it does not have "get-up-and-go". The car is full of pep. And it's gorgeous. I have it in white and it is a beauty -- stands out in any parking lot. Easy to drive and a smooth drive.
Prius love wrote on January 23, 2012 - 9:17am Permalink
Hello Barb, What is the most you like about your Prius V? Would be interesting to hear your insights on few things you particularly like about your Toyota Prius V model. Thank you.
RoseMary wrote on March 15, 2012 - 11:29am Permalink
We just bought the Prius v last night and I love it! It does have a lot of get up and go - especially in Power mode, but Evo is great as well. I traded in my Prius 4 after having it for a year and the new 'v' has a lot more head room as well as other great features. It is more roomy all over like the Highlander I had. As for looks, it isn't any worse than many other models from other manufacturer's and I happen to really like the style of it. I think it is a lot more sporty looking that a station wagon - ugh - or a mini van. They do stand out in a lot so I agree with Barb on that one. I think anyone would be happy with these. We certainly are as well as our kids who have them!