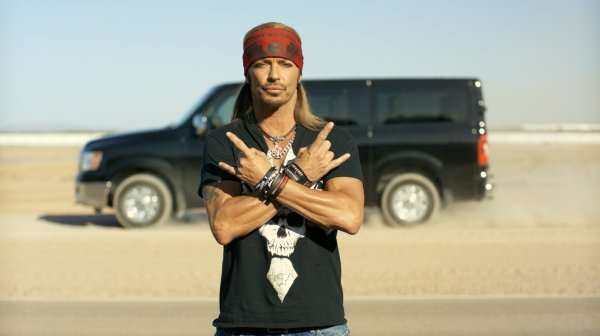 If you think that thick bandanas, ratted jeans, makeup, and power ballads are the greatest thing since guitars were electrified, you'll love this one. If you remember the 1980s and '90s hairbands with embarrassment then, well, you might find this amusing at least.

The song is actually well done, though Michaels retains his limited vocal range. Many of the scenes poke fun at the 1990s vision of made-for-MTV rock videos with their cheesy dramatic shots and lame cliche's. Including the inclusion of a supermodel female engineer as the "girl ringer" for the rocker to croon for. Most of the engineers depicted in the video are actual Nissan technicians at their proving grounds in Arizona, where the video and its offshoots were filmed.

"As one of the newest nameplates in the commercial vehicle segment, we want to bring attention to the operational efficiency of our innovative, durable Nissan NV Cargo, NV Passenger and NV200 Cargo vans – but do it in a way that gets business owners' attention," said Fred Diaz, senior vice president, Nissan Sales & Marketing and Operations, Nissan North America, Inc.

Well, this was one way to do it and it's creative, for sure. The video shorts highlighting the various portions of the stress testing going on during the music video are contrived, but often filled with little nuances that make them amusing nonetheless. While Michaels has very little in the way of delivery in these bits, his surrounds often include things like test dummies fitted with bandanas like his, joking references to the Arizona heat, and more. All in all, a fun campaign.

Watch the video below and visit Nissan Tough Love for more. Keep an eye out for the Bret Michaels bobblehead.