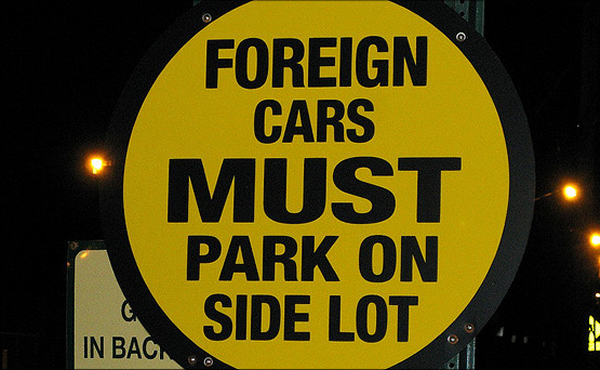 The United Auto Workers union has been losing membership and influence for years and now, in its third attempt to unionize Nissan workers in the southern states, the UAW is desperately trying to make international problems relevant to itself and workers in Tennessee.
Advertisement

The United Auto Workers union released a report in Washington, D.C. claiming labor rights and worker's rights violations by Nissan - not in Tennessee or Mississippi, where the company has tens of thousands of employees building cars and engines, but in.. Tokyo, South Africa, Brazil, and other international locations. This, the union asserts, is reason enough for the workers at Nissan North America to unite and become dues paying members of the UAW.

Seem like a rough sell? That's why it's being made in Washington rather than Canton.

The forty-six page report, written by Lance Compa, a senior lecturer at the Cornell University School of Industrial and Labor Relations, was paid for by the UAW and reads like a political screed meant for nightly talk shows rather than as a serious, scholarly look at the social issues affecting labor in many parts of the world. Of course, this sort of partisan-like spin is nothing new in Washington, a fitting place for the report to debut.

The UAW, which has been historically anti-foreign in its rhetoric for decades, has been slowly dying. The union is losing its grip on automakers in this country and facing blowback from what many consider its greatest failure since it began: the near-demise of two of the nation's three leading automakers during the 2008 financial crisis. Although the causes are more complicated than that, more than a few Americans have blamed the UAW for the failure and taxpayer bailouts of General Motors and Chrysler, with many economists and pundits at the time pointing to what they considered to be exorbitant wages and benefits being paid to union workers.

Nissan has blasted the new report from Compa as just more rhetoric from the union. "This UAW-commissioned report is neither objective nor credible.." the company's spokesperson said in a statement responding to the report's release. "Nissan has never violated labor standards and would never tolerate threats or intimidation of our employees. Nissan will continue to abide by U.S. labor laws and support the rights of employees to decide whether they wish to be represented by a union," the statement continues.

That last part is in direct response to continued allegations from the UAW that Nissan has been using a modern form of union busting by threatening employees with termination and blackballing if they unionize. The fact that no current employees of Nissan have backed up the union's claim that this happens with credible evidence only hurts the UAW's claims that it does happen.

Further, it's difficult to see how the UAW, which is busy in the southern states attempting to convince workers that paying dues and organizing with the union will help them, when the union's major claim to fame in recent times has been in shuttering plants and negotiating ownership for itself of failing auto manufacturers while simultaneously negotiating concessions and losses for its membership with what's left. Why would a worker in Canton, Mississippi believe that the UAW is "here to help" when most of the union's current work seems to be outside of the U.S. as they try to make themselves yet another international concern rather than a local problem solver?

Especially given the union's anti-global rhetoric up until only very recently, as the above photo of a sign at a union building attests?

Or, as Daniel Howes in The Detroit News asks, "How does campaigning against a would-be employer, or using Germany’s IG Metall union to pressure Volkswagen AG into establishing German-style works councils in its Chattanooga, Tenn., plant, make a positive case for union representation?"

Given that most of the attempts to organize Nissan workers are based on negatives, it's not a stretch to see why the workers in Canton and Smyrna might be a little leery of the UAW's third attempt to bring the automaker's workforce into the dues-paying fold.