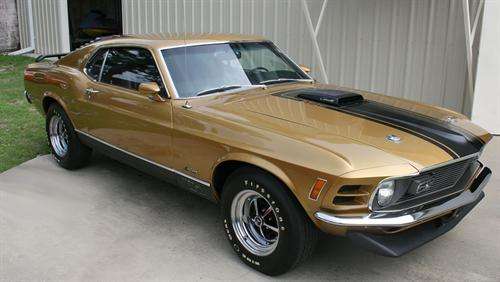 With only 857 made (and only 50 in this paint scheme), the 1970 Mustang Mach I Cobra Turbo Jet is one of the most sought after ponies in the world and a rare, museum-like original will be sold at auction next month in Mississippi.
Advertisement

1970 was likely the pinnacle of the pony car era with every Detroit automaker producing what most agree were the best of the small muscle cars ever built. Cars from that time are some of the most sought after collectibles of American muscle history. That year, Ford produced 857 Mach I Mustangs sporting the 428 Super Cobra Jet/Drag Pack, common called the Mustang Mach I Turbo Jet.

Out of those 857, though, only fifty had the black on gold paint scheme shown here of those 50, only two were produced with a 4.30 Traction-Lok Rear Axle and of those two, only one also had Power Front Disc Brakes. That singular, unique Mustang is about to hit the auction block. When it does, expect the $100,000 recently paid for a completely original 1970 Dodge Challenger R/T Mopar to be just getting started.

The best part? This car is 100% original, no restoration or upgrades added. It's been literally driven on the weekends and otherwise stored in a garage since its purchase in 1970.

Over 400 classics and muscle cars, including this unique Mustang Mach I, will be auctioned next month in Biloxi, Mississippi at the 16th annual Biloxi Auction as part of the Cruisin' the Coast event. The auctions will be conducted by Vicari Auction. If you're interested in attending, you can find out more at vicariauction.com.

For those who can only dream of racing in a 1970 Ford Mustang Mach I Turbo Jet.. here's some help for your imagination courtesy of YouTube: