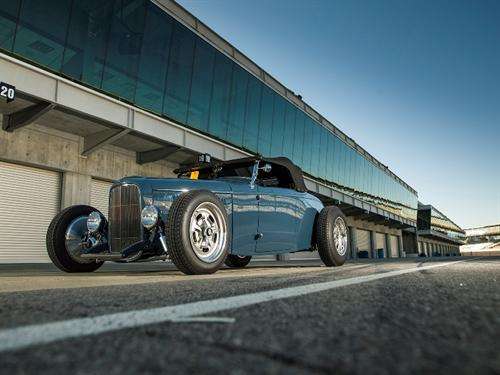 Indy racing legend Tom Gloy has returned to the automotive arena to win the Goodguys 2012 Tank's Hot Rod of the Year with his custom Roadster build.
Advertisement

Tom Gloy is known for his low and fast driving, having spent 25 years racing cars on various circuits. His Trans Am World Championship, Formula Atlantic title, and Indy500 showings are all testament to his ability to do this well. In 1984, he was at the Indianapolis Motor Speedway for the Indy 500, where he finished 14th. Last weekend, he returned, this time to take the gold.

Built by custom builder Brizio Street Rods, the '32 Ford has been customized to lower the driver closer to the pavement - something Brizio says most Roadster restorations and builds don't often do. Drivers often "sit too high," Brizio says, and thus aren't very comfortable at speed. So he went with traditional style and low-to-the-pavement channeling.

The custom Roadster has a narrower front cowl to soften its normally wide stance, which is not needed if the weight distribution is lower to the ground. This cut a full 3-1/2 inches off the radiator shell. The floorboards were dropped to near-extreme levels, making them the lowest ever made at the Brizio shop. Finally, the rear wheels were tucked in more tightly against the now-smoothed rear quarters.

Most of the hot rod is not original, of course. The chassis has been customized, the suspension is new, and the rake is custom-made on new-build axles. The knockoff wheels are made specifically for this car, as are the machined brake caliper brackets. The engine is a 302-inch Hilborn EFI Ford crate motor and that's attached to a 5-speed Tremac transmission. The color of the body work is Porsche blue from the 1950s. The red leather interior contrasts this and is hand-stitched by interior master Sid Chavers.

To prove the car was ready, Gloy didn't just accept it from the builders and then trailer it from his home in Lake Tahoe, Nevada to Indianapolis. Instead, he packed his bags and climbed into the machine and drove it the near-2,000 miles to the Speedway. Proving the car is not just a good-looking Roadster, but is also a driver.