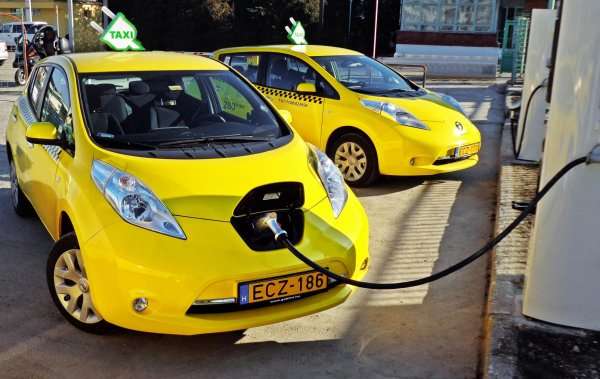 Taxis can have some of the most demanding driving conditions of any vehicle. Yet their normal daily operation is actually perfect for electric cars because their routes are usually relatively small, are in urban environments, and are usually at below highway speed. This is where an EV is most efficient. So it's not a surprise that electric taxi cabs like the Nissan LEAF Taxi is becoming so popular.

This year alone, more than 100 battery-electric Nissan taxi cabs have been sold in Europe from the UK to Hungary and beyond. Eastern Europe is becoming the fastest-growing new market for EV taxis, with Green Lite Taxi Kft in Budapest, Hungary signing on for 65 new LEAF-based taxi cabs to be delivered over the next few months. To power these taxis, the firm installed seven quick chargers throughout the city. The company plans to go 100% electric.

So far, their electric taxis are requiring only one charge per shift and are showing big savings in fuel and maintenance costs. Örs Lévay, Green Lite Taxi Kft., CEO: “Along with the large savings on fuel and maintenance, the Nissan LEAF is very smooth to drive and almost silent, which means a more enjoyable journey for my customers and the drivers say typical 10 hour shifts are less tiresome.”

The Nissan e-NV200 is another popular electric taxi option, especially in Northern Europe. The top European countries for Nissan electric taxi cabs are the Netherlands (194), the UK (134), Estonia (74), Hungary (68), and Germany (30).

Taxi Electric in Amsterdam was the first private taxi service to switch to a fleet of 100 percent electric taxis in November 2011. Since then, others from across Europe have joined the revolution, with the Nissan LEAF and e-NV200 now being used by taxi businesses in Stockholm, Prague, Barcelona and Rome.