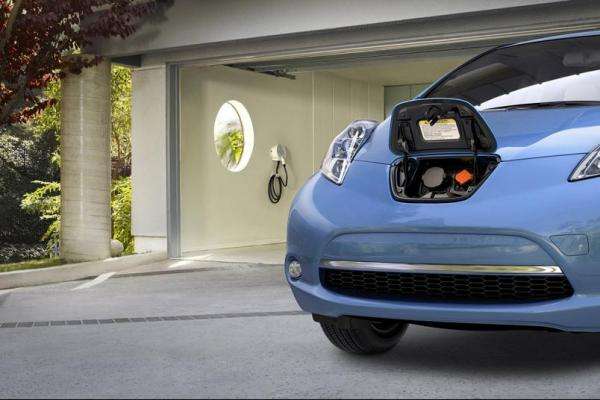 Nissan has been testing a LEAF to Home system for some time, a technology that allows the electric Nissan LEAF to power a home during blackouts and crisis. Now they're expanding that system to help electrical grids.
Advertisement

The LEAF to Home system is part of a larger Japanese Vehicle to Home (V2H) initiative to expand the use of electric vehicles in both emergencies and as parts of the overall electrical grid during daily use. The new testing is part of demand response testing and involves several Nissan LEAF sales outlets in Japan and ENERES Co, an energy management company.

While the LEAF to Home system has proven successful in creating a personal, family response system for adding electrical capability to a home during blackouts, this new V2H initiative is expanding on that role by allowing the electric Nissan LEAF to become a part of the electrical grid itself during daily use when peak power requirements and grid demands are high.

Currently, demand response as an overall strategy has been making Japanese grids more efficient by giving incentives to consumers to modify their power consumption during times of peak usage. This began in 2011 after the Great East Japan Earthquake when the peak use hours began to draw attention. Power companies often request aggregates to use energy conservation measures and compensate them for the energy saved during those periods. Many businesses and other power users now work around those periods in order to save or supplement income as a result.

To further augment that, this new demand response initiative is hoping to assess the usefulness of using V2H systems during peak-use hours to put the stored power in unused, but plugged-in electric cars back into the grid. Those doing so would ultimately be compensated, but for now, the goal is merely to find out whether it would be feasible as an addition to the current demand response schemes.

The testing involves several Japanese Nissan dealerships under the Kanagawa Nissan umbrella. Tests are conducted by ENERES, which will assess the amount of power being used and returned as well as when that usage is best and how to draw. Nissan has already noted similar programs being done around the globe, though few on a scale as large as this one. Its nearest counterpart in the United States is the Sacramento, California demand response interface that is ongoing.

DID YOU KNOW: Electric cars could power homes when hurricanes knock out power

The Japanese tests will be conducted in three hour blocks on weekdays beginning this month and running through January 2015. Two or three tests per month are expected during that period.