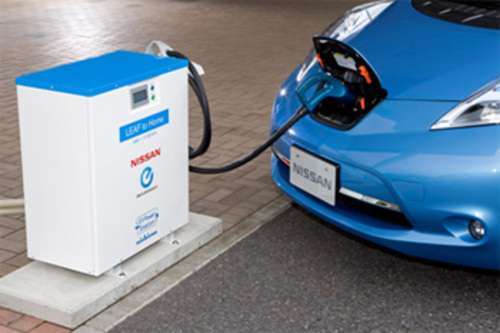 Electric cars could power homes when hurricanes knock out power

One of the envisioned roles for electric cars is providing emergency power when disaster knocks out the power.
Advertisement

This week the 'Frankenstorm', Hurricane Sandy, is pummeling the East Coast with rain and flooding that has killed several people and reportedly 8 million or more people are without power. Last summer during a heat wave, the political comedian Rush Limbaugh ranted against electric cars suggesting that they become useless when the electricity goes out. This is not the first time Limbaugh has been incorrect about (or lied about) electric cars, because in truth some design features in modern electric cars have the goal of using electric cars to act as an emergency power supply to stabilize the electric grid, such that an electric car could be a great resource when the power goes out, rather than a hindrance.

By the way, when the electricity goes out how will gas stations pump gasoline? Won't gasoline cars also become useless pretty quick?

One of the common "what if" portrayals of electric cars is an idea Nissan placed in a Leaf commercial the company began airing last week. The commercial showed the Leaf owner arriving at her home, driving into the garage, plugging a cord into the car, all the lights come on in the house, and the narrator voice saying "What if, one day, [electric cars] could power your house?"

Functionally, the large battery pack on an electric car is electrical storage. The prime purpose of that electricity is to power the car down the road, but it can be used for other purposes.

One of the elements of the Smart Grid is deployment of electrical storage units that serve as a distributed resource for generation of AC power to improve the security and reliability of the electric grid. If the electrical grid needs more power, signals are sent from the grid operators to tap on electricity sources. In the era of the dumb grid those electricity sources are generally fossil fuel power plants, but in the era of the smart grid it could be electricity stored in large grid-connected battery packs. All of the battery companies making batteries for electric cars, are also involved with making electrical storage units for this purpose. Coda Automotive for example is a subsidiary of Coda Holdings, and that company is also the parent of Coda Energy that repurposes battery packs designed for Coda Automotive as electrical storage units. Battery maker A123 Systems (that recently entered bankruptcy proceedings) makes electrical storage units for the smart grid that store 10-20 megawatt-hours per unit.

Does this capability exist today? The vision is not fully implemented but elements of the vision do exist today, but there are many barriers.

The technology that is closest to implementation is the DC Fast Charging systems, because both the CHADEMO and SAE DC Fast Charge systems allow for bidirectional energy flow while an electric car is connected to a charging station. That bidirectional energy flow means that electricity can flow not just from the electrical grid into the car, but from the car to the electrical grid, if needed.

In May 2012, Nissan and Nichicon announced the "LEAF to Home" power supply system, which can supply electricity from batteries onboard in Nissan LEAF electric vehicles (EV) to homes when used with the "EV Power Station" unit developed by Nichicon Corporation. The unit also provides a faster recharge than the standard 3.3 kilowatt charger on-board the Leaf. It is envisioned as a means for home owners to save money on electricity during the day, by charging their Leaf at low night-time electricity rates and then during the day powering their home from the Leaf when day-time electricity is expensive.

The Fully Charged show (Robert Llewellyn) took a look at the "LEAF to Home" unit in a recent episode (see below).

A barrier are laws governing "Interconnect Policy" because generally speaking electricity sources, on the grid, are not cars but big power plants. The existing policies are geared towards big power plants providing power, not cars. Another barrier is the design of charging connectors, and whether the communications protocols supports bidirectional power flow. This appears to still be a matter of study and research.