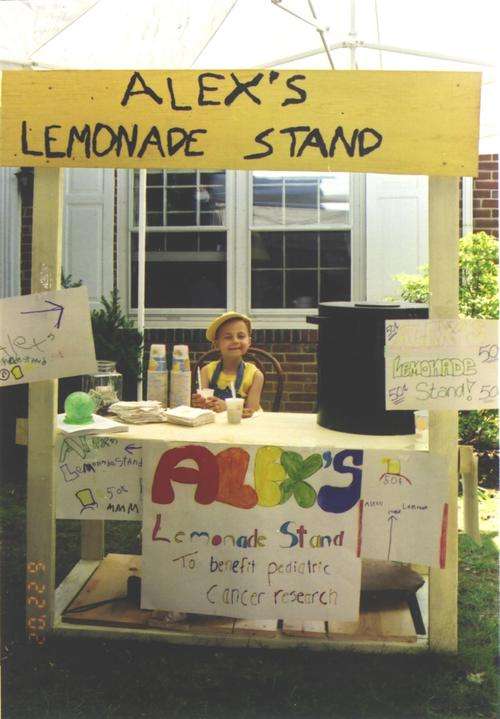 Both Hyundai, with its Hope On Wheels program, and Volvo, with its sponsorship of the Alex's Lemonade Stand Foundation, are spearheading September as National Childhood Cancer Awareness Month.
Advertisement

September is National Childhood Cancer Awareness Month and long-time child cancer charity sponsors Hyundai and Volvo are spearheading the auto industry in the effort to help the good fight.

Volvo, Alex and the Lemonade Stand
At the age of four, Alexandra Scott, diagnosed with cancer, decided to do something to help other kids battling the disease. So she set up a lemonade stand (pictured at right) to raise money for cancer research. Her stand opened in 2000 and caught the attention of Volvo in 2002, who gave her the first-ever Volvo for Life Award in 2003. By then, Alex's lemonade stands had franchised and were bringing in money from all over the nation. When she died in 2004, her stands had raised over $700,000, still short of her million dollar goal.

So Volvo and its dealership network got to work and sold enough lemonade to put the funds raised over $1 million by the end of that year. Volvo is the founding sponsor of the Alex's Lemonade Stand Foundation (ALSF), which has since raised over $55 million for childhood cancer research in Alex's name.

This year, continuing the trend, lemonade stands will appear in Volvo dealerships around the country selling lemonade to support ALSF. In addition, every Volvo sold will add $10 to the month's sales for the foundation.

Hyundai Hope on Wheels
Back in 1998, Hyundai began its Hope on Wheels program to raise money for Children's Oncology Group institutions nationally to fund pediatric cancer research. Events are held around the country at COG hospitals to raise awareness and give Hope Grant awards for research projects related to children's cancer. Money is raised through run/walk events, fundraisers, and culminates in a Handprint Ceremony where children diagnosed with cancer choose a paint color and put their hand prints in it on a white Hyundai Tucson.

This year, Hope on Wheels will donate more than $10.25 million to children's hospitals nationally, most of which is given as Hope Grants to research projects. The hand-painted Tucson will become a symbol of the fight against childhood cancer and tours the country with the program.

For the month of September, Hyundai will be holding events at various children's hospitals around the country, ending in a trip to Washington, D.C. where this year's Hope on Wheels National Youth Ambassador, Brianna Commerford, will share her story and speak on behalf of the Childhood Cancer Caucus.

It's Not Always Horsepower
Automotive isn't always about horsepower, design, or efficiency. Sometimes, it's about lemonade stands and hope.