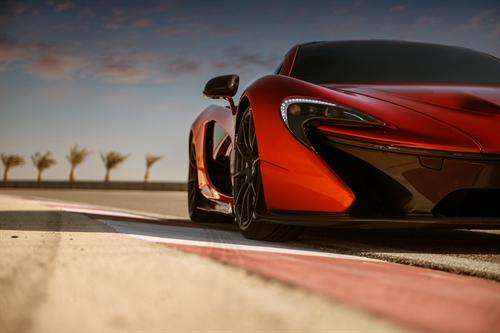 McLaren P1 interior revealed, plus more images of the supercar

McLaren has finally given a solid glimpse of the interior of the P1's interior as well as more publicity shots of the P1 pending its debut in the UAE.
Advertisement

The uncovered McLaren P1 shed its camouflage and bared itself at the Bahrain International Circuit so we could all get a good look at this new supercar, which then made its way to the United Arab Emirates this week. Ahead of that and the car's official, full-information debut in Geneva, the interior was also teased just enough to give us a glimpse as to what's going on inside the cockpit of this Formula One-inspired machine.

As the attached gallery shows, the exterior shots in Bahrain are breathtaking with the desert sun glinting off of the McLaren P1's unique orange paint and black accents. The design's emphasis is definitely on aggressive track performance and muscular looks. Where the McLaren 12C has a minimalist, but powerful appeal, the P1 has a curved, cut and highly stylized look for a more immediate and visceral attraction.

Where the 12C is an open-collar wine and dine master, the P1 is a pheromone-laden burst of instant hormonal energy.

Inside the car, the "shrink wrapped" look continues in a minimalist cabin taken straight out of Formula racing. An earlier dash gauge preview showed us what the driver will see when powering the McLaren P1 through its racing paces. Now, we have been given a much better look at the cockpit in its entirety, showcasing the minimalist "fighter jet" look and extensive use of carbon fiber throughout.

As the gallery shows, the P1 interior utilizes bucket seats positioned and shaped similar to those found in the 12C, but has a much more open, simplistic dashboard and central console in comparison. The steering wheel is the same F1-derived "flat circle", three-point design, but the instrument cluster is a dynamic set of LED screens rather than physical gauges, allowing the driver personalized access to vehicle information as well as track-based informational displays when in "Race" mode.

The release says that "The interior of the McLaren P1™ offers the driver and passenger a cocooning, efficiently packaged, comfortable cabin. The interior feels like the cockpit of a fighter jet, complete with glass canopy overhead and, with a windscreen deeper than it is wide, visibility is optimised. This makes the car all the easier to plant on road and track." An apt description of what we're seeing in these photographs.

Carbon fiber is a heavy theme in the P1, appearing everywhere from the MonoCage chassis to the body panels and throughout the car's interior. The top resin layer has been removed to give the fiber inside the cockpit a more natural, basic look. The usual sound dampening has been left out of the P1 as well, which tells us it will be a loud, engaging drive where every grumble of the massive engine will be heard.

The production-ready McLaren P1 will be debuted at the Geneva Motor Show in March.