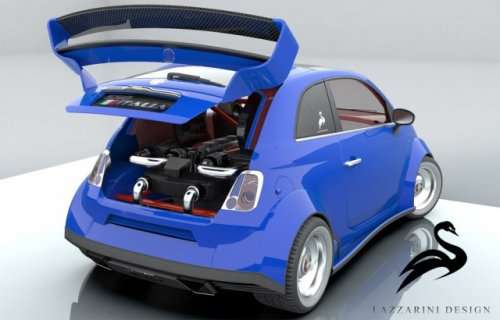 Lazzarini wants to stuff a Ferrari into a Fiat 500

Italian design firm Lazzarini wants to put Ferrari power into the tiny Fiat 500 and see what happens. They're gonna need a shoehorn and some bacon grease.
Advertisement

Lazzarini Design in Italy is known for two things: ultra-modding cars for performance and putting really huge, outlandish rear spoilers on them. Interestingly, for the Fiat 550 Italia (they're name for this new creation), they actually had to downgrade performance, but still managed to put a gigantic spoiler on anyway.

The 550 Italia is a modified Fiat 500 hatchback into which a Ferrari 458 Italia V8 engine has been stuffed. The concept of putting huge engines into tiny vehicles is not new, of course. Anyone remember the Volkswagen Golf GTI W12 650 or the Ford Fiesta SHOgun? What's new here is that not only is the horsepower versus size/weight way off kilter, but Lazzarini actually had to reduce the Ferrari engine from 570 to 550 horsepower because their calculations said that this was the maximum that a 500's chassis could take.

Not only that, but in order to keep the car from taking to the air in unpleasant ways when the accelerator is pressed, the designers had to lengthen its wheelbase by 11.8 inches and widen it by that much in the rear as well - up front it's a mere 7.9 inches wider. This takes the Fiat 500 from the "tiny subcompact" straight into the "good luck finding a parking spot now" category.

To get the huge Ferrari engine into the Fiat, of course, they couldn't just open the hood and stuff it in there. Even the straightest of shoehorns and all the bacon grease in Italy wouldn't pull that off. So they removed the back seats and put it under the hatch. Then, since air flow to an engine of that size is kind of important, they added an intake on the top of the 500's roof.

Finally, the huge bi-plane like spoiler was thrown on and the whole beast was given a suitably descriptive name: 550 for the horsepower output, Italia to denote the Ferrari engine's origins.

Luckily, the Fiat 550 Italia is only a design exercise in virtual CAD land. No actual 500s were harmed in the making of this monster. The firm says it would cost, coincidentally, $550,000 USD to make one in real life.

aMawds wrote on August 8, 2012 - 1:05am Permalink
Not sure why this post is so against the idea. Sounds badass to me. Can you just imagine the ridiculous comedy that could be achieved by one of these coming into a corner at a track, only to exit from a large plume of tire smoke, where a short italian man jumps out with his LavAzza cup, looks at the other guys with "super big anti roll bars" on their "beefed up" 500's, chuckles, and walks away? Unless they screwed it up and kept it FWD. That would make it mid-engine, front wheel drive. Or MF for short. Not to be confused with a Mother who likes to do things you don't want to think about.
Aaron Turpen wrote on August 9, 2012 - 2:38am Permalink
I'm not so much "against" the idea as I am incredulous that anyone would even think of doing it. It's like putting a jet engine on a Pinto. Other than getting the driver and possibly some spectators killed, what's the point?