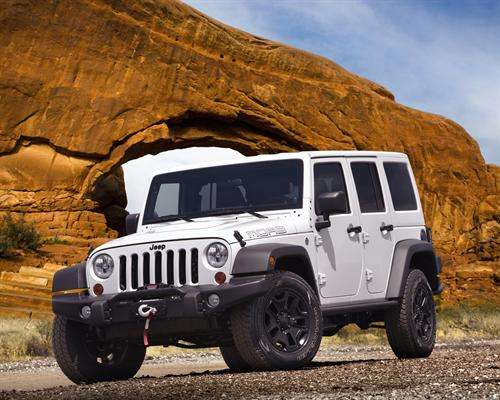 That's not all, though, as the 2013 Jeep Wrangler also took the #3 slot in the coveted Top 10 Models list of Best Resale Value vehicles, marking the Wrangler's second time on that list as well.

The Top 10 List is dominated by Toyota, however, with Best Brands Toyota and Lexus taking the lead and Toyota brands holding six of the ten spots on the Top 10 Models list. Another Top 10 pick was the 2013 Porsche Cayenne.

Kelley Blue Book’s KBB.com Best Resale Value Awards are based on projections from the Kelley Blue Book® Official Residual Value Guide, determined by a skilled staff of automotive analysts. These prestigious awards honor vehicles expected to maintain the greatest proportion of their original list price after five years of ownership.

Not surprisingly, the best-selling Wrangler has often topped lists for SUV of choice. Resale value is an important marker for consumers to consider when purchasing a new vehicle, and the KBB Awards target those vehicles most likely to hold the best percentage of their original MSRP upon resale within the first five years of ownership. Given that during this time, the dreaded "new car premium" often kills a large percentage of the vehicle's value once it's purchased and driven off the lot, vehicles that can retain a high value in those first few years are considered excellent options for consumers.

The 2013 Jeep Wrangler is the second model year of the newest Wrangler powertrain to which new features have been added inside the cabin, including much-improved seating. As always, the Wrangler is well-deserving of the awards it receives as one of America's most iconic and capable off-road machines still in production.