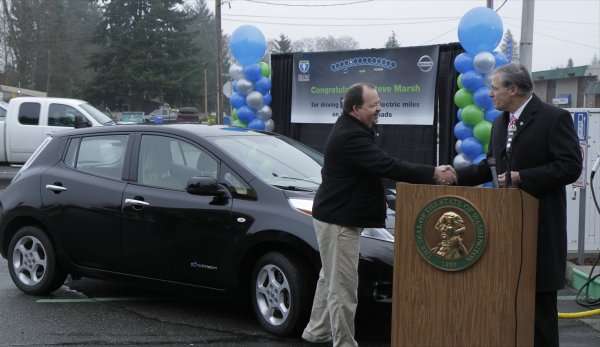 How a Nissan LEAF owner commutes over 130 miles daily

Electric cars are just for short distances. Right? Well, with the right circumstances, they can do more than that as Steve Marsh proves with his 130-mile daily commute, which has put over 100,000 miles on his Nissan LEAF and saved him thousands in gasoline costs.
Advertisement

Marsh, who lives in the Seattle, Washington area, has driven his LEAF for more than 100,000 miles with his daily commute of over 130 miles round trip. He was honored by Washington Governor Jay Inslee (pictured: Marsh at left, Inslee at right) at a ceremony showcasing him and his LEAF as well as the fast-growing charging infrastructure in the state.

Marsh purchased his 2011 Nissan LEAF new and has driven it daily since. He estimates that doing so has saved him thousands in gasoline costs over his previous internal combustion engine (ICE) car:

"With a daily commute of about 130 miles, I've saved more than $9,000 compared to my old gas-powered car since I bought my LEAF," said Marsh, who credits Washington's strong charging infrastructure. "With plenty of public charging options, as well as a charger installed at my office, my LEAF is a perfect car for my commute."

Marsh's decision to buy the LEAF was based largely on its low cost of ownership. It's cheaper to fuel and maintain, making it simpler and cheaper to own over the long run, says Marsh.

The LEAF owner is a financial controller at Taylor Shellfish and talked briefly in front of a gathering at a local Nissan dealership where the Governor of Washington, Jay Inslee, and state Transportation Secretary Lynn Peterson spoke about Washington's plug-in grid adoption and proliferation. Marsh directly attributes his ability to drive his LEAF for 130 miles daily to that infrastructure. He drives to work, plugs in, and then drives home. He often uses chargers at public locations when he stops to shop or eat on the way to and from work as well, augmenting his charge on the way.

The video below highlights the event and Marsh's candid remarks about his car:

John Goreham wrote on December 18, 2013 - 1:38pm Permalink
Awesome story. It would be cool to see how much he saved compared to owning a less expensive Nissan car like a Versa, or maybe a Sentra comparably equipped. When he bought his Leaf they were still pretty expensive.
Aaron Turpen wrote on December 20, 2013 - 5:28am Permalink
The car sold for around $35k at that time, I believe, but Washington already had their heavy incentives in place and the fedgov incentive of $7.5k was there as well. So I'd bet his price premium over a comparably equipped Versa was probably only six or eight thousand. Factor in his fuel costs, oil changes, timing belt change, engine flush, radiator flushes, etc. and he's probably come out ahead.
Randall wrote on December 19, 2013 - 7:05am Permalink
I drove my Nissan a whole year , for less than $176.00 . It's a Great car ., soo smooth, peppy, no vibration or hesitation.
Sal Cameli wrote on December 24, 2013 - 7:36pm Permalink
I've owned my 2013 SL for 8 months and 3 days and I've driven 8700 miles and I've spent $230 in electricity so far. I've also had my tires rotated at 7500 miles which was $29.95 + tax. That's all I've spend so far. in NJ there is no sales Tax on an EV. I'm a Costco member and if you use their website to purchase a new car they'll get you $2000 to $2500 off. So after the $7500 off from the Federal Gov and no Sales Tax and Costco discount the LEAF cost me fully loaded $26,500 To fill up the LEAF at my house costs $2.52, I usually get 84 miles per charge which is exactly 3 cents per mile. So 100 miles costs me $3.00 How many miles do you get in $3.00 in Gas?