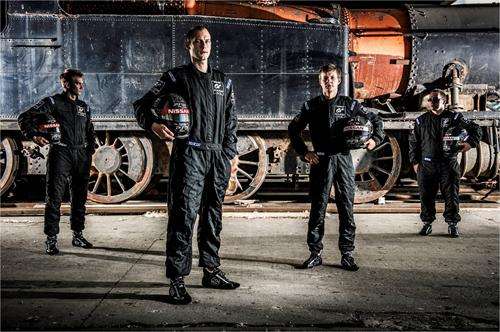 Nissan and PlayStation will host 2012's GT Academy Champions, who will line up on the grid at the Dubai 24 Hour race later this week as these video game champions turn their skills into real life racing in two Nissan 370Z Nismo GT4 Race cars.
Advertisement

The four GT Academy Champions will compete in pairs in the Dubai 24 Hour race starting Thursday, January 10 and running through Saturday the 12th. The four video gamers won the competition against thousands of contestants from around the world, giving them a chance to go from virtual Gran Turismo® 5 to real life racing with training on the Nissan Endurance Race Team.

After only four months, Wolfgang Reip of Belgium and Mark Shulzhitskiy of Russia will team in one 370Z Nismo GT4 Race with Nissan racers Lucas Ordonez (Spain) and Roman Rusinov (Russia). The other will be piloted by Peter Pyzera of Germany and Steve Doherty of the U.S.A. along with Nissan racers Sabine Schmitz ("Queen of the Nurburgring") and Ale Buncombe (Britain).

The four gamers turned racers have spent the past four months since the virtual competition in the comprehensive and grueling Driver Development Program at the GT Academy. There, they were given driver's coaching, karting, fitness and nutrition programs, sports psychology training, and simulator sessions. They then completed several races in the United Kingdom in order to qualify for their international race license and to prepare them for real-life racing competition.

The four will be part of Nissan's team at the Dubai 24 Hour and will be driving the GT4-spec Nissan 370Z Nismo.

Darren Cox, Director, Nissan Global Motorsports, explains: "Each year we have developed and refined the Driver Development Program for our GT Academy winners and I firmly believe that it is now the best program in the world. We are absolutely confident that these guys will line up in Dubai better prepared than many of their more experienced adversaries who have taken a more traditional route into motor sport. Lucas, Jordan Tresson and Jann Mardenborough, our previous GT Academy Europe winners, have demonstrated that we are producing great drivers with bright futures. This new crop of four drivers is no exception, and I am looking forward to watching them perform in Dubai in a pair of Nissan 370Zs."

The popular Gran Turismo franchise of games for the Sony PlayStation has sold over sixty million copies worldwide with the latest version, Gran Turismo® 5, selling more than any of its predecessors, reaching 5.5 million units in its first two weeks of sales. The game is one of the most popular race driving simulations on the market and prominently features the Nissan 370Z.

The latest street-legal Z car has a shorter wheelbase than its predecessors, uses more lightweight body materials, and has a higher-output engine coupled to a 7-speed transmission with paddle shifting. Its GT4-spec brother has a race-tuned engine and chassis changes to comply with racing requirements as well as added safety equipment for the endurance driver.

Here's video about the upcoming race itself: