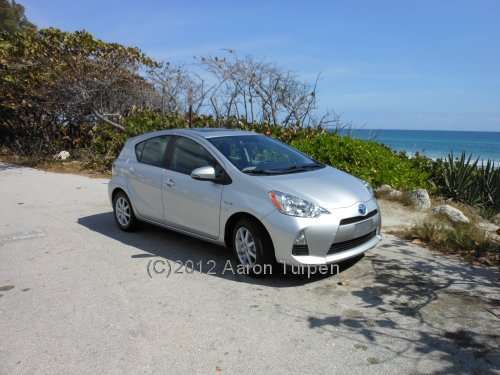 New to the market, cheap, very fuel efficient, and has received a lot of press attention since its debut. All adding up to it's being the one car in the U.S. that is driving off the lot as fast as dealers can get them there.
Advertisement

An analysis of March sales by Edmunds.com found that the Toyota Prius c has an average dealership stay of only 8 days before being purchased. The average vehicle on American car lots in March sat for 53 days, by comparison, though all of the cars on the Edmunds top 20 list of fast sellers were selling within 21 days of dealership arrival.

Most Toyota hybrids were doing well, according to the analysis. The top 20 list included the Camry (18 days) and Highlander (17 days) hybrids while the Prius v was not on the list, though it did make February's.

The vehicles with the longest-running sales streak, staying on Edmund's top 20 list for best-sellers for months, are the Audi Q7 (11 days) and the A6 (19 days) as well as the Hyundai Elantra (12 days) and Accent (20 days).

None of Detroit's manufacturers are on the list at all, likely due to a lack of discounting and manufacturer incentives being at their lowest since 2008 for the Big 3.

Of course, the Edmunds list doesn't look at total units sold, just at inventory numbers in a supply-demand ratio. A look at overall vehicle sales in the U.S. and Canada shows that 53.3% of vehicles sold were in the "light truck" category (which includes large SUVs), with the major sellers in that category (all Detroit 3 brands) showing year-over-year gains in both countries of about 4% for March. That's a full percentage point higher than the new vehicle market overall, which went up about 2.8% year-on-year.

Looking at it this way, it's plain that "smaller, lighter, cheaper, and more economical" is not really the North American car buying mantra.

Loaddown wrote on April 13, 2012 - 2:31pm Permalink
"8 days" on the lot for a Prius C- I had to wait 2 weeks to get mine. It is hard to find a dealer that has one to show you, much less test drive. They have $2000-$7000 dealer markup in South Florida.
Aaron Turpen wrote on April 13, 2012 - 10:00pm Permalink
South Florida and California are the biggest markets for this car right now. Not surprised you're having to wait. Two dealerships here where I live (one in Cheyenne, WY and the other near Denver, CO) have them on the lot, but won't promise anything in terms of color choice or model type on the phone as they're selling fast.
Anonymous wrote on April 21, 2012 - 11:46am Permalink
i found this type of car in autowranglers