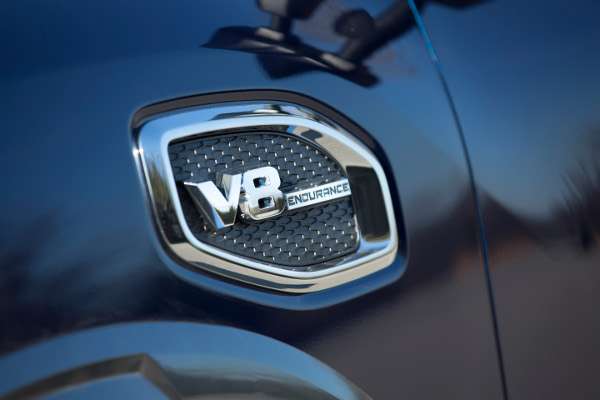 Although everyone expected Nissan to unveil the latest Titan gasoline models, no one expected a Titan XD with a gasoline option. But that's what they showed.
Advertisement

Nissan unveiled the standard half-ton Titan models everyone expected to see at the New York International Auto Show (NYIAS) this week, but the Tennessee-based company still had something up its sleeve. Fred Diaz, division vice president and general manager, North America Trucks and Light Commercial Vehicles, Nissan North America, pulled the cover off of a new Titan XD. This new truck, which will be in showrooms alongside its award-winning Cummins-powered brother, is powered by the same big 5.6-liter V8 Endurance engine debuted in the standard Titan models. The gas-powered Titan XD has the same size and bulk as its diesel-engined sibling, but packs a big-displacement gasoline option instead.

This Titan XD Crew Cab with the gasoline engine option will have a starting price of $35,295 manufacturer's suggested retail (MSRP), plus destination. Five trim points in the four-door model will be offered, including 4x2 and 4x4 models and a Pro-4X trim. A new 7-speed automatic transmission, standard in the half-ton Titan, will be in this heavy-duty half-ton option (XD).

Although Nissan did not reveal towing or fuel economy numbers for the gasoline option in the XD line, we expect the numbers to be similar to the regular Titan model with the same drivetrain. We speculate that there will be no options other than the Crew Cab for the Titan XD in order to preserve its weight and size, which mark it as heavy-duty per the EPA and thus exempt it from several fuel economy and emissions requirements.

As for the standard Nissan Titan half-ton, now being shown as a 2017 model year truck, information on its capabilities has been available for some time. This new showing in New York, however, gave a first-hand look at its dimensions in real life. It's about 14.7 inches less in length and will be offered in cab configurations ranging from standard (Single) to extended (King) and four-door (Crew). Bed lengths will also be varied per customer choice. The 390-horsepower 5.6-liter V8 Endurance engine and 7-speed automatic will be used and an as-yet unannounced V6 gasoline engine option will also be offered. We expect that V6 to be announced later this year and to herald the announcement of a new Frontier, which has long needed an update.

Dave wrote on March 27, 2016 - 9:39am Permalink
I suspect they will use a new iteration of the 4.0 liter but if they decide to go whole hog they just might use the new 3.0 liter that would be something to look for. AS it is smoother more refined and more powerful ,in both TQ and hp than the current 4.0 liter.
Bob wrote on April 8, 2016 - 4:34pm Permalink
Why do they only offer a 67" bed in the CC version? Also, they do not give any capability figures for the gas version in their brochure.
Uk Classifieds wrote on April 13, 2016 - 4:32am Permalink
Have you ever considered about adding a little bit more than just your articles? I mean, what you say is fundamental and everything. Nevertheless imagine if you added some great images or video clips to give your posts more, "pop"! Your content is excellent but with pics and videos, this site could certainly be one of the greatest in its niche. Awesome blog!
Natalietep wrote on September 22, 2017 - 1:23pm Permalink
This message is posted here using XRumer + XEvil 3.0 XEvil 3.0 is a revolutionary application that can bypass almost any anti-botnet protection. Captcha Recognition Google, Facebook, Yandex, VKontakte, Captcha Com and over 8.4 million other types! You read this - it means it works! ;) Details on the official website of XEvil.Net, there is a free demo version.