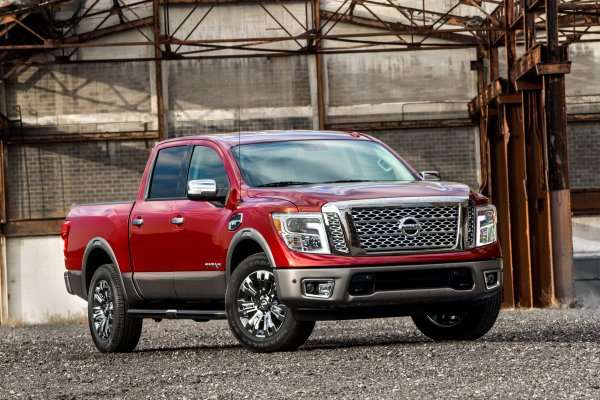 Nisan quietly unveiled specs and information on the new Titan gasoline-powered truck, which will come later this year as a 2017 model. Amid the hubub of the Chicago Auto Show, the Titan's release got sidelined and went largely unnoticed. Here's what you missed.
Advertisement

For the past year or so, the focus has been on the new 2016 Nissan Titan XD, with its huge Cummins powerhouse and build of, well, titanic proportions. After a week in that truck, I can tell you that the hype is not overdone. Now attention turns to the gasoline half-ton version of the truck, aka the "standard" Titan. During the Chicago Auto Show, Nissan quietly unveiled the specs for the pickup and let loose that it'll be coming as a 2017 model, which means a release later this year.

"There's a strong family resemblance between TITAN XD and the standard TITAN, with their shared rugged exterior style," said Rich Miller, Director of Product Planning for Trucks, SUVs and Commercial Vehicles, Nissan North America upon the release of the information.

He's right. The photo above shows the Titan in its production prototype form. But a lot of differences are also noted and the specifications released give us more to consider. Dimensionally, the new half-ton Titan is smaller in wheelbase, length and height. Nissan has also kept quiet about which V6 engine will power the truck, but we know all about the V8 coming to it thanks to the unveiling of the Armada.

The new Titan half-ton will be available as both a 4x2 and 4x4 model in Crew Cab, King Cab, and for the first time, Single Cab. Three bed lengths will also be offered, 5.5-feet, 6.5-feet and for the first time, 8 feet. Five trim levels will be offered as well, using the standard Nissan nomenclature (S, SV, SL, Pro-4X) and a new Platinum Reserve that mirrors the same package on the Titan XD.

The new V8 is a 5.6-liter that offers 390 horsepower and 401 pound-feet of torque. This engine and the accompanying 7-speed automatic transmission are also found on the 2017 Nissan Armada. As we said earlier, though, the V6 offering has not yet been detailed. We expect that the Nissan Frontier will share that V6, so its unveiling may be forthcoming soon too.

As with all Nissan pickups sold in North America, the Titan will be built in Canton, Mississippi with its engine coming from Tennessee. Dimensionally, the Titan is smaller than the Titan XD. Its wheelbase is 139.8 inches (nearly a food shorter than the XD) and its overall length is 228.1 inches (14.7 inches shorter). Width stays the same and height is just over an inch lower thanks to the lighter-duty suspension.

Nissan is promising the 2017 Titan will be coming this summer. We expect the full unveiling of the truck to happen later this spring, perhaps at the New York Auto Show coming in the next couple of weeks.

Tesla Contemplates A New Strategy for China Retail even As Sales Boom
Jay Leno on Elon Musk & EVs: “I Think He Should Get ... Credit"
END_OF_DOCUMENT_TOKEN_TO_BE_REPLACED