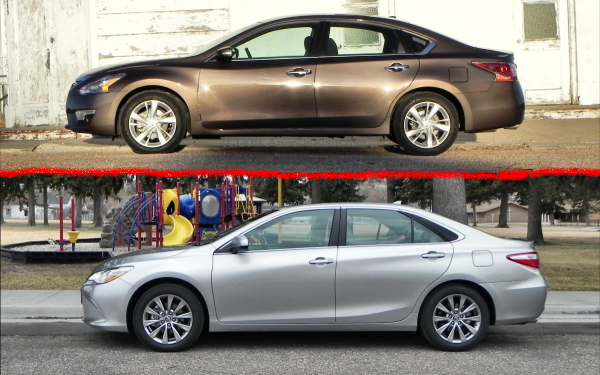 In four categories of comparison important to midsize car buyers, we compare two of the top-selling vehicles in the segment. Which comes out the winner?
Advertisement

The midsize car category is one of the hottest in the market. More midsize cars are sold than any other single type of vehicle in the United States. The clear leader in the segment is the Toyota Camry, whose production totals alone would make it one of the top ten automotive makes in North America even without including all of the other vehicles Toyota builds. Yet the Camry now faces stiff competition from several contenders on the field, one of which is the Nissan Altima, which often occupies the second best-selling slot.

The Nissan Altima has been the company’s flagship for several years and saw a full revamp in 2013 to much acclaim. Standards like Zero Gravity seating, a more forward-looking design, and contemporary styling marked the new Altima. The Camry, meanwhile, answered the renewed vigor in the midsize market with a revamp of its own just this year. The 2015 Toyota Camry is a much-improved sedan that eclipses the “old” Camry, redesigned just two years earlier, in nearly every way.

So how do these two cars compare, side-by-side? We’ll pit them together in four categories important to every midsize car buyer.

Powertrain and Fuel Economy
Both the Altima and the Camry are available with either a base four-cylinder engine or an optional six-cylinder powerplant. Their best fuel economy is with the four, of course, and the Altima clearly triumphs there with a 31 mpg combined economy versus the Camry’s 28mpg. Those three points translate directly to highway MPG as well, with the Altima still besting the Camry by three.

Both vehicles are front-wheel drive with the key difference between them being the Altima’s use of a continuously variable transmission (CVT) whereas the Camry utilizes a geared six-speed automatic. The far more efficient CVT wins out despite the Altima’s 2.5-liter engine outputting a few more horsepower than does the Camry’s 2.5.

Interior Comfort, Fit and Finish
In this category, it’s a more difficult comparison to make. There are no numbers to easily quantify and say “there’s the winner.” To sum it up before we get started: it’s a draw.

The Altima has standard Zero Gravity seating that must be tried before it can be understood. It’s simply phenomenal. Outside of that, interior fit is of quality overall with few hard plastics or other complaints in the cabin.

The Camry sports comfortable seating and quality cabin materials, though it’s not as luxurious in appeal as the Altima is. Space, however, is huge in the Camry with more than ample shoulder and legroom in both the front and back seats. The Camry is one of the few midsize sedans that has a back seat capable of comfortably seating even people over six feet in height without the occupants in front having to scrunch to make room.

Daily Use Ergonomics
This is another place where the two seem to come in at a tie. The Nissan Altima has a great around-town feel and daily drive appeal. It’s comfortable, easy to maneuver, has good power output for passing, and plenty of cargo and other space. The Camry, likewise, also has all of those things. Some technology options separate the two, however, with the Altima offering a few park assist and other items that will not be found on the Camry. All said, however, for most buyers, the two cars are generally equal.

Road Presence
On the road, the newly improved Camry is now a better ride than is the Altima. With a retuned suspension, better handling dynamics through corner stiffening and other updates, plus a quieter interior now that sound-absorbing glass is being used, the Camry is a better highway car.

The win isn’t totally cut-and-dried, however, as the Altima sports those aforementioned Zero Gravity seats up front and a generally nice cruising feel, especially in its upper trims.

Given that, though, we still give the win in this category to the Camry overall.

Conclusions
Comparing the two, it’s difficult to find a clear winner. Most decisions for the buy will likely come down to manufacturer reputation (in the buyer’s mind), stylistic tastes, and price. Those who do a lot of highway driving may be happier in the Camry, despite its lower fuel economy, whereas those who spend a lot of time in their car may prefer the better seating and more luxurious cabin of the Altima. In exterior styling, the Altima is much more eye-catching to most onlookers, though the new Camry design should not be ignored.

These two midsize sedans illustrate how far the midsize market has come. Just a few years ago, both of these were lackluster cars. The Camry, in particular, was often the butt of jokes as the “most boring car in the world.” A lot has changed in just a couple of short years.

Chris wrote on May 5, 2015 - 6:38pm Permalink
The most important categories are reliability and resale value. The Camry smokes the Altima in both categories. Winner winner chicken dinner = Camry.
canuk wrote on May 6, 2015 - 6:41am Permalink
Sure Chris, just google Camry oil consumption issues, and the slim chance people will get help, let's talk about that one.
Brad wrote on May 5, 2015 - 10:53pm Permalink
HA good luck with that excuse bc Nissan has been dependable for years. Maybe better than a dull Toyota. ALTIMA