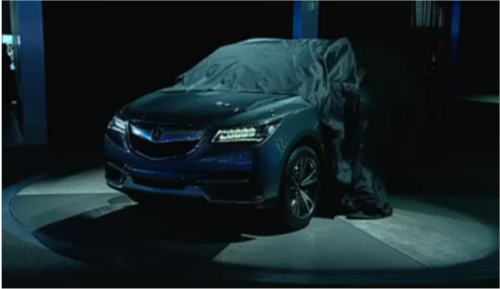 The new MDX Prototype showcases the future design direction of Acura's next-generation of sport utilities. The new MDX production will release mid-year as an all-wheel and front-wheel-drive SUV.
Advertisement

The MDX Prototype looks very production-ready and Acura says the SUV will release later this year to showrooms around the nation. The 7-passenger Acura MDX is a performance luxury SUV with both AWD and FWD options.

Mike Accavitti, VP of National Marketing Operations for Acura, says that the goal "..is to advance on MDX's already great dynamic performance while improving fuel economy and luxury comfort." The new approach Nissan's luxury arm is working towards is to bring a new "Aero Sculpture" effect that builds on the brand's already unique look. This will be done across the board at Acura and the high-selling MDX is their first expression of this for an SUV.

The 2014 MDX Prototype has a more premium appearance versus its current-generation parentage. LED headlights, called Acura "Jewel Eye", improve the front end's forward look and helps to accentuate an otherwise clean and aerodynamic shape. The point at the nose is de-accentuated and a more rounded overall sculpture adds to its wind slippage. A lower roofline (about 1.5 inches lower than the 2013 model) adds to these changes to give the new MDX an overall 16% improvement in aerodynamic efficiency. Acura achieved this through extensive testing in Honda's new wind tunnel in Raymond, Ohio.

Inside the MDX
Interior space is not compromised, however, as better compaction of the underlying components allowed for better utilization of the interior to make up for it. A longer wheelbase also means not only a better ride, but much better leg room as well - especially in the second and third rows. This should move the 2014 MDX further away from the "compact SUV stigma."

The interior for the MDX has not been updated yet, so the reveal did not give many details on its design elements or changes. "While we aren't showcasing the interior today, I can assure you it will further improve the already great functionality in the cabin and cargo area while really amping up luxury, comfort and quiet," added Jon Ikeda, chief designer, Acura Design Studio. "And that's really the focus of this new MDX, delivering outstanding luxury performance and family capability in a more refined and alluring package."

Powertrain and FWD
The addition of the front-wheel-drive option comes thanks to strong demand from consumers in warmer climates who prefer better economy over the stability of AWD. The all-new chassis the MDX rides on will further support this, being more rigid and more lightweight than before. Front and rear suspension improvements give a sportier driving character and improve stability in a luxury SUV already known for its sporty feel. These improvements also further reduce cabin noise.

The power plant under the hood is the 3.5-liter i-VTEC SOHC V6 engine with Variable Cylinder Management (VCM), which gives improved torque and off-the-line pickup as well as higher fuel efficiency for what Acura believes will be class-leading MPG. This engine is made in Lincoln, Alabama as one of the new offerings in the Nissan lineup.

Safety in the 2014 MDX
The new Acura MDX is designed to better its predecessor's top-notch safety ratings, which include a Top Safety Pick Plus rating from the Insurance Institute for Highway Safety (IIHS) and a 5-star rating from the National Highway Traffic Safety Administration (NHTSA). Available technologies will include the Forward Collision Warning (FCW) and Lane Departure Warning (LDW) systems, a Multi-Angle Rearview Camera is standard while a Blind Spot Information (BSI) option is also available. Other options include the Lane Keeping Assist System (LKAS) and Active Cruise Control (ACC) with Low-Speed Follow.

Infotainment
Next-generation AcuraLink will centerpiece the information technology focus of the interior. These will continue Acura's partnerships with Pandora, SiriusXM, and Aha by Harman. These will couple with the fee-based services Acura offers through AcuraLink.

Made in America
For the 2014 model year, the new Acura MDX will move all of its production to Nissan's Lincoln, Alabama production facility where the engine is being made. The current-generation MDX is made in Alliston, Ontario, Canada using U.S., domestic and globally-sourced parts. This will further efficiency in manufacture and improve already-brisk sales.

The 2014 Acura MDX Prototype showcases what the next level in luxury SUVs will be for this company. The beautiful new styling and excellent new engine are strong offerings from Honda's luxury brand.