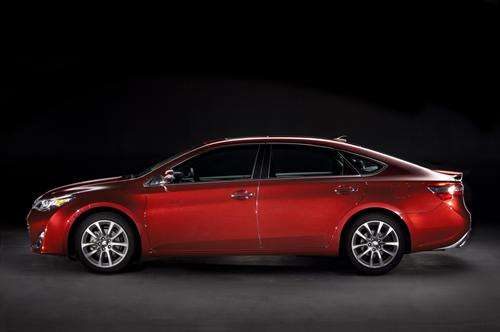 Pricing for the 2013 Avalon has been announced by Toyota, with MSRPs starting at $30,990. Three hybrid options will also be offered.
Advertisement

Toyota has announced manufacturer's suggested retail prices (MSRP) for the all-new 2013 Avalon premium mid-sized sedan. The sedan will be offered in both a V6 gasoline powertrain as well as a Hybrid Synergy Drive option. The 2013 Toyota Avalon arrives in dealerships in early December.

The new look for the Avalon has updated its appearance with a more sculpted, modern feel. While this styling has improved its consumer appeal, it's also increased its efficiency by lowering drag. The top-line Toyota also has more interior changes to upgrade its opulence while the engine remains as the proven, reliable 268 horsepower 3.5-liter V6 mated to an upgraded 6-speed automatic transmission. Fuel economy in the gasoline Avalon is an EPA-rated 25 mpg combined (21 city, 31 highway).

The Avalon Hybrid uses a smaller, 2.5-liter Atkinson cycle, 4-cylinder engine coupled to a continuously variable transmission (CVT) and Hybrid Synergy Drive electric components. The same proven setup used in the Camry Hybrid, putting out a total of 200 horsepower overall. The EPA has not yet rated the 2013 Avalon Hybrid.

The XLE Premium sells for $33,195 in the gasoline option and adds a 3-door Smart Key, backup camera, auto-dimming mirror with compass, a moonroof, and an integrated garage door opener as standard.

The Hybrid Synergy Drive power trains include most of the above amenities in their respective packages and start at $35,555 in the XLE Premium trim. The 2013 Avalon Hybrid XLE Touring will be marked at $37,250 while the Limited package will MSRP for $41,400.

Prices here do not include destination or handling. The price differential between the 2013 Avalon in gasoline versus its hybrid counterpart is the smallest (by percentage) of the entire Toyota lineup.