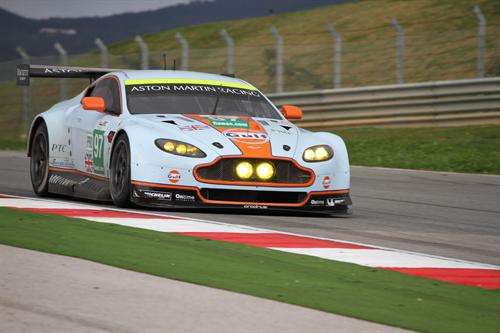 This weekend, the Aston Martin 2013 motorsport season will begin at the 12 Hours of Sebring in Florida, debuting the 2013 Vantage GTE with is new V8 power.
Advertisement

The revised version of the 2012 race-winning Vantage GTE with it's new V8 powerplant and improved dynamics makes its competitive debut at the FIA World Endurance Championship this weekend in Florida.

“We have continued to focus on improving the Vantage GTE’s durability and drivability while optimising performance," said John Gaw, team principal at Aston Martin Racing, "and have managed to complete some significant mileage in the two sessions at Portimao and Road Atlanta. The plan was to get two full lifecycles on the 2013 car before the start of the WEC season and we’re on track to do so. The cars both performed very well and we are pleased with the data we have gathered."

The team will be pushing hard for the best results during the pre-season run. “We always race to win, but Sebring is very much part of our 2013 pre-season test programme. If we can collect the data we require and achieve a podium with either car, we would have met our objectives," continued Gaw.

The team plans to push the new car hard, honing its reliability in race conditions and ironing out the details of race running with a new vehicle. Several of the Aston Martin Racing Team are newcomers to the team, including Senna, Johnson, Lamy and Lana. Of those, Senna is a newcomer to GT racing itself and has had to crash-course through the details specific to this type of endurance racing, such as driver changes and driving for both performance and longevity.

Qualifying for the 12 Hours of Sebring begins today at 1:35pm local time and the race begins Saturday, March 16th, at 10:45am local time.